Skip to main content
Posted by Veronica Boulden on February 13, 2009
Our daughter has never been to Disney World.

I hadn't thought about this much until I was almost assaulted by a flight attendant who found out we didn't take her to the parks on our recent visit to Florida. It all played out like a scene in a bad comedy.

The stewardess kept hitting my arm saying things like "Bad girl!" and "Shame on you!" I thought she was kidding, at first, but after the tenth smack, when I wanted to rub my arm because of the throbbing pain, I realized she was trying to communicate something deeper... disappointment. I think she felt that it was very important for a little girl like ours to meet Mickey Mouse and neglectful, even abusive, that we wouldn't have taken her.

To make the scene all the more comedic, while this exchange was going on, at least ten children, some even younger than Norah, escorted by their travel weary parents, squeezed past us in the isle of the plane. Every single one of them was wearing Mickey Mouse ears and colorful Disney T-shirts. And, Norah didn't help the matter. When the attendant thinly veiled her accusations with upbeat questions directed towards her about what she did on vacation, Norah said absurd things like, "Well... I went to the fair!" and "I rode on a train!"

Those answers were funny to Dwayne and I, but as soon as we dared to snicker, we only got more smacks and scoldings from the attendant. (By the way, that trip to the fair Norah was talking about and the train ride took place over a year ago in a small town here in Connecticut. But, I didn't see how I could begin to explain this to the attendant. She wasn't interested in hearing my explanations anyway.)

And, for some reason, instead of being angry, which I think might have been my typical response to a stranger trying to lecture me about something that is none of her business, the incident got me to thinking, hard, about our family priorities.

I'm still not sure I will be able to articulate the ideas that are forming in my mind as I think about this lady's chastisement of us, but I want to try. I happened to read a post by another mom who blogs and homeschools her kids. In it, she quotes part of an article called “If We Are So Rich, Why Aren’t We Happy?” by Mihaly Csikszentmihalyi that explores why wealth and the material blessing it brings doesn't always produce contentment, doesn't always ensure that children will be engaged, won't always allow students to experience what the author calls "flow..."

"The prerequisite for happiness is the ability to get fully involved in life. If the material conditions are abundant, so much the better, but lack of wealth or health need not prevent one from finding flow in whatever circumstances one finds at hand. In fact, our studies suggest that children from the most affluent families find it more difficult to be in flow — compared with less well-to-do teenagers, they tend to be more bored, less involved, less enthusiastic, less excited.

...Our research suggests, for instance, that more affluent teenagers experience flow less often because, although they dispose of more material possessions, they spend less time with their parents, and they do fewer interesting things with them. "

I know Norah isn't a teenager, but I believe this article applies to her as well. For me, the last bit of it helped explain why we have never missed visiting the theme parks, even though we've been close enough to go on several occasions while we stay with Dwayne's family in Florida.

Visiting the parks isn't out of the question for us financially, even though we are "less affluent" than many families. We would just have had to decide in plenty of time to set aside the money we need to cover the expense. We simply must budget spending of that kind. But, it wasn't a lack of money that prevented us from visiting the theme parks. It was a real lack of time. We were just way too busy doing other things as a family.

Norah was never bored on our trip, not even once. She had a look of sheer delight on her face all week, as she whizzed by me, always busy doing something new. And, we were doing so many "interesting things" that our trip never lacked "flow," not even once. It wasn't until that fateful plane ride that I realized we had missed Disney.

But, we hadn't missed Disney. And I think that is my point!

Below are several photos taken on our trip. Please read the captions. They explain some of the simple ways Norah stayed engaged. 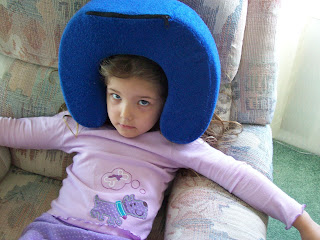 Don't mistake her face or body language for boredom. Oh no. Norah found this neck pillow, put it on her head and was pretending to be "a statue... from the Museum of Natural History." She sat like this for several minutes, taking her act very seriously. 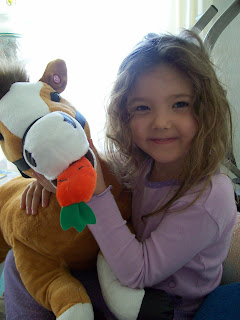 Norah would press his ear and this horse would whinny and you'd hear his feet clop. Norah galloped him all around the house, fed him this stuffed carrot and used a baby doll brush to care for his mane. 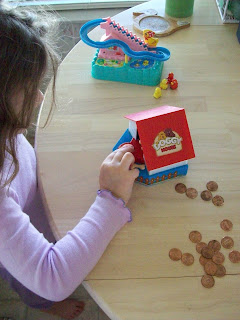 The puppy dog would come out and grab the penny when you put it at the door of this penny bank. The ducks, in the background, would climb the ladder and slide down, one by one. These are just two of the toys from a suitcase full of special goodies Grandma pulls out anytime her grandchildren visit. Dwayne actually played with many of the same toys when he was a boy. 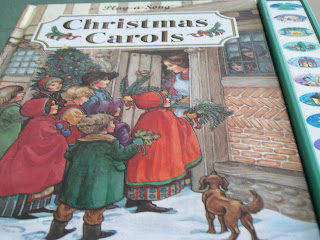 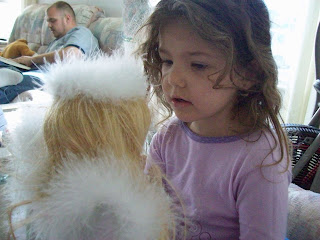 This is one of a dozen singing dolls Grandma had out for Norah to play with as often as she wanted. This angel sang "Silent Night" when Norah pressed a button. Norah would ask to shut herself in Grandma's walk-in closet and we could hear her singing her heart out from inside her "house." 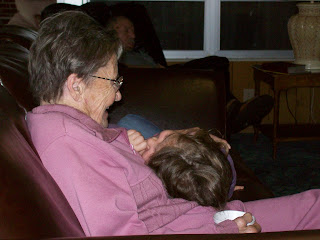 Norah made friends with one of Great Grandma's peers at the nursing home where she lives. I watched them in wonder from my chair next to the sofa. The two of them had such a sweet time together. 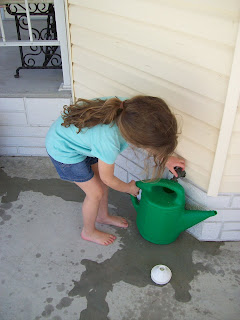 Once during every visit, Norah will water the plants around Grandma's house that the rain can't reach. She loves to do this because she's totally in charge and gets to fill the bucket herself. 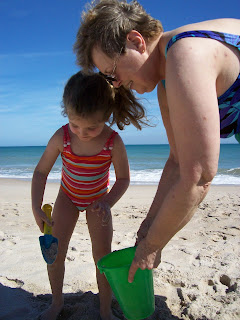 Norah, Grandma and I played on the beach while Dwayne and his dad took a long walk along the shore so they could talk man to man. 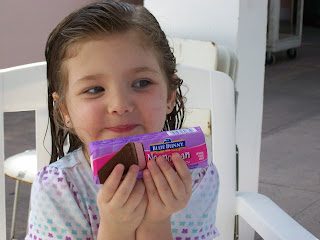 Grandpa took us to the neighborhood pool. After a few hours of swimming, the two of them had ice cream treats from the pool's cafe. Grandpa let Norah pick her own. 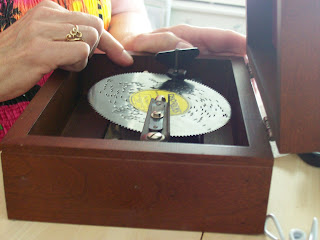 Grandma played different songs on her old music box while Norah danced. Norah's favorite song was "The Magic Flute." She'd ask for it by name and twirl around till the song was over. 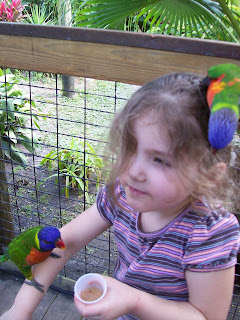 Norah fed the birds at the zoo. 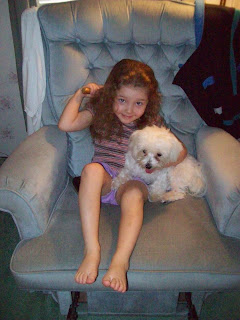 "Grandpa Herb? Can I use your hairbrush? I'll put it back when I am done..."
The dog sat with Norah while she brushed her hair with Grandpa's brush over and over and over... 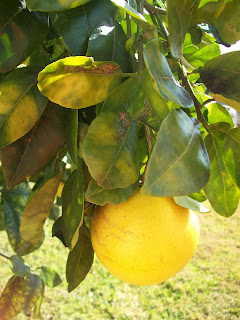 Norah picked ripe grapefruit off the tree in Grandma's backyard. 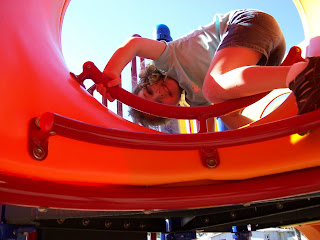 She played in a park near Great Grandmom Gerda's nursing home. 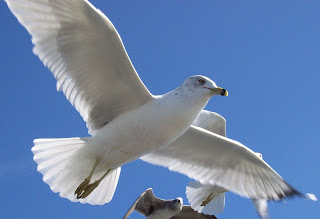 Norah fed the seagulls off the dock with bread rolls that Grandma saved for us in the months leading up to our visit. 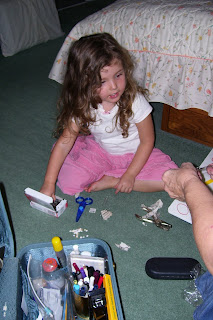 I found Norah and her Grandma on the bedroom floor once, exploring a case of what looks like office supplies.

Grandma Karen can turn the simplest things into an adventure and keep Norah engaged like this for hours...
Who needs Disney anyway?!

Lori said…
the fact that so many people believe disneyworld is a childhood rite of passage is a testament to advertising! :^)

we have also been chastised for not even considering vacations like this.
February 13, 2009 at 10:48 AM

Veronica Boulden said…
Lori,
I know! I've been seeing the commercials all over TV! And, I don't even think I watch that much TV! There is this new campaign: Kids get in free for their birthday... But, I immediately think of air fair, lodging, food, rental car, gas... You are right, Lori. Trips to Disney really have become "standard" for America families. Maybe that is part of the reason the lady was so shocked at us. But, this is also one reason why we, as a nation, are spending so much more than we make. We feel so entitled.
February 13, 2009 at 12:15 PM