Skip to main content
Posted by Veronica Boulden on February 05, 2009 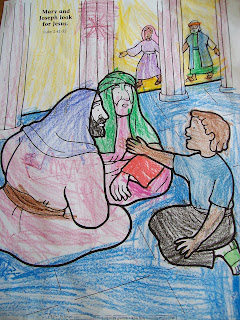 A coloring page Norah completed at church.
More than once, I've lost my husband in a store. He wanders off a short time after we get there, since he doesn't have the patience to walk every isle looking right and left at every single thing, like I do. So, he goes away to look at or do whatever it is that he looks at or does. By the time I am ready to go, I realize he's not with me and didn't tell me where he was going to be exactly... or did he? So, I set off to find him and I look and look and look everywhere- at least twice. And, I get upset and I want to cuss. I'm about to have him paged over the intercom and that's when he usually ends up finding me, trying to find him.

Once, though, I happened to find him first, before he thought I must be looking for him. He was in the electronics section, talking passionately to some male associate holding some sort of electronic device that they were both pointing at excessively. I stood back, watched and listened for a time and to me, it was like they were speaking in Tongues. I just marveled at my husband for a second, then interrupted him and his new friend. They parted like they were old buddies, talking in a little more gibberish, then laughing. The only thing I understood was the "See ya, man!" and the "Yeah, bye!" When I told him how I'd been looking for him and he saw how frustrated I was, he looked at me in confusion and said something like, "Why? You should have known I'd be looking at the new... blah, blah, blah." I guess I should have known that, you know, since he's my husband and I should know what he is passionate about. But, I confess, I must not know him as well as I thought I did.

And, I share this because I think these events in my life have lead me to some insight into a Biblical passage that has always troubled me. It's the account in Luke Chapter 2 where Jesus gets separated from his parents after the Passover. His parents leave Jerusalem without him. Thinking he's with other relatives and friends in their caravan, they end up going an entire day's journey until they realize he isn't there. The Bible says "they returned to Jerusalem looking for him." Then, after three days, they found him in the temple "sitting in the midst of the teachers, both listening and asking questions of them."

It took them three days to figure out where he was and what an awful, restless, frantic three days it might have been. The temple was huge in that day, you know, so they may have actually narrowed their search to those holy grounds long before they found him with the teachers. But, I think I can relate to this, too, in a silly way. I mean, have you ever gotten separated from someone you love in a Super Walmart? Even though you know they are still somewhere in the same store, it's over. There is just no finding them.

When his parents did find him, his mom asked him something like, "Why have you treated us this way? Your father and I have been looking for you everywhere!" This is the part of the story that I haven't ever liked, it has never sat well with me because it appears like Jesus' response to them makes him callous or even a little smart-mouthed. He says, "Why is that you were looking for me? Did you not know that I had to be about my Father's business?"

And, it wasn't until my husband said nearly the same thing to me in the store that day that I could say I had some grasp of the feeling I think Jesus had when he said, "Didn't you know I had to be about my Father's business?" I think he was honestly confused as to why his parents didn't know him well enough to know where he'd be. My husband wasn't trying to insult my intelligence or put me in my place or make a sarcastic statement when he asked, "Why?" I was looking for him. He just thought I knew him better than I did.
Spiritual