Skip to main content
Posted by Dwayne Boulden on September 13, 2009 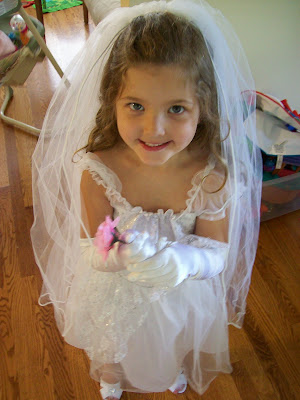 Norah playing "dress up" with a wedding costume her Grandma Evans sent in the mail. She won't be getting married till she's at least thirty. And, she won't even notice boys till she's able to do something about them... Right?!
The following post was written by my husband who will be cleaning his shot gun (or guns) when that first date arrives to pick Norah up (when she's thirty). He cleans his guns periodically now, but not because they need it, really. He's just rehearsing for later in life (much later).

Disclaimer: I originally asked my wonderful wife (the keeper of this blog) if I could guest post occasionally. I wanted a place to share some thoughts from my perspective on our family, God and life on the same platform so her readers (mostly family) would be able to have a "one-stop-shop" experience. I'm not sure what form those will take, but I am excited to see it happening.
I am hoping Google's servers crash and burn long before Norah or Avril have a chance to hold me to this, but I think this article, or at least its premise, is dead on, and is something I have said for years.
I do not want to recap the whole article, as I would rather have you read it, even if it is a bit long. I will only say this. I find it against the character of God to PURPOSEFULLY build us with incredibly strong sex drives at a young age only to say do not use it. It simply does not fit with the God I know. He does not design for no purpose. Instead, I think that sex drive is designed to unify two people, and to produce offspring, both of which are only possible under God's plan in the context of marriage. This does not minimize the directive to stay chaste if you are not married, but it is the only logical conclusion I can come up with to why sex drives are so strong so young.
His Two Cents