Skip to main content
Posted by Veronica Boulden on November 12, 2009 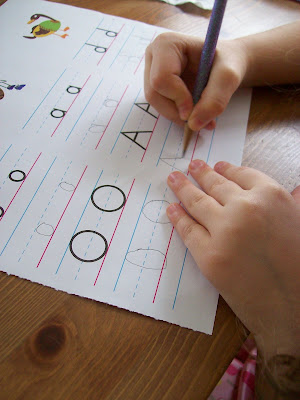 I know my posts about homeschooling are usually all blue skies and roses, but I've been noticing something. The more I mingle with homeschooling moms, the more I see that we generally come in two types and those two types are very different.

There are the uptight ones. I'm one of those who read and plan and read and plan and make lists and teach and teach and teach even before my kid is out of the high chair. We often overdo it, yes, but we mean well. And, then, there are those carefree types who frankly, don't ever seem to be home enough to actually homeschool and who "Don't really care about how their kids do things, just as long as they do them."

At playgroups, you hear a lot from this kind of mom, first, because she's always at playgroup and second, because she seems to have a lot of explaining to do. She says high-minded things like, "I never taught my *Johnny how to hold his pencil. I just allowed him to figure that out naturally, in a way that works for him." Now, that seems so organic and cool and when we more traditional homeschool moms hear that we feel a little insecure because we felt the need to actually buy a curriculum (Gasp!) and for one second, we try not to sit up so darn straight on our park benches. But then, we glance over at Johnny and not to be too ungenerous, since he can't help it, we see him climbing up the slide and sliding down the ladder and then notice he's wearing the clothes he slept in, his hair hasn't been combed in days and he isn't wearing a coat and he's at the park and it's November! And, that's when we uptight moms ponder the merit of a carefree mom's words and wonder whether or not a hands-off approach should be applied to everything.

Take handwriting as an example... When Norah is older, I imagine I can send her off to do copy work and she'll come back several minutes later and I'll be able to simply assess how neat her paper is and tell her "Good Job" or "Do this part over." But, for right now, while she is still learning her strokes, handwriting has more to do with where she starts on the line and in what direction she travels once her pencil moves. What her letters actually end up looking like is less important for now. If I send her away, I guarantee you she'll come back with a row of perfect lower case t's, but if I watch closely, I notice that she starts on the bottom line and goes up, then crosses her t's from right to left. That works for now, but she won't always be forming rows made up of six of the same letter. She'll need to add dozens of other letters to that line to make words and she'll need to be able to do this quickly and that's where the importance of I'm doing comes in.

So, handwriting can be down right painful for us these days, to say the least, so painful that I can see why other type moms avoid it. And, it won't be easier when Norah is older, several years after she's learned her own way of making letters, because, by then, retraining her to do it the correct way will be even more difficult than it is now. So, Norah often has to do more erasing than she does writing these days. Neither one of us enjoy the subject, she, because she starts in the wrong place or goes in the wrong direction so often and I, because it's my job to point out her mistakes. We're both relieved and sigh and push the page away in disgust when she finishes her practice for the day.

I implement a more "natural" strategy as often as it works, but I only do this when the method doesn't really matter in the end... not with handwriting, but take unloading the dishwasher, for example. Norah doesn't do this yet, but I am just using it as an example because I imagine one day she will. And what a glorious day that will be! I really don't think I will care how she unloads the dishwasher, for goodness sake. I'll just be glad she did it! Now that's something she can figure out in a way that "works for her."

However, how she loads the dishwasher is an entirely different matter. There's a science, a fine art even, to how one manages to fit in as many dishes as possible and how to place them in such a way that makes sure they all come out clean and none of them end up with food dried on. (Dwayne's mom is an artful master of dishwasher loading, by the way. She can fit sinkfuls into one load. But, she has a least a few years... Uh hum... more practice than I do at this. Love you, Mom.)

...So it is with handwriting. There is a small, though not entirely insignificant science to it, a fine art, an efficiency. Where you start a letter and which direction you go once you move your pencil really does matter because if you start in the wrong place, you can actually slow down your writing in the end. If you hold your pencil wrong, it makes it harder to write with ease and do things like take notes and write letters in the long run.

And for those parents who defend their lack of diligence with arguments like "He won't he need to use that skill anyway. He'll be typing on a keyboard most of the time," you should know that I just roll my eyes at you when you aren't looking. That is the same bad logic that keeps certain public schools from teaching kids how to add and subtract since "They'll always have a calculator on hand when they need to do that." Isn't that the same sort of idiocy we're trying to avoid by homeschooling our kids in the first place?

So, please, let us homeschoolers not be so arrogant as to assume we can do everything better, particularly those of us who aren't really doing anything at all. And, just because public schools generally stink, doesn't mean they get it all wrong. (There. I said it.) Handwriting, for example, is just one of those that things that doesn't need to be reinvented at home. Your five year old, no matter how clever he is, is not going to be able to figure out a more efficient way of writing the letters of the alphabet than those professionals who have thought about it and taught it for decades already. If saying so means I loose cool points with my homeschool friends, then fine, I'll loose cool points, but I just feel like it needs to be said.

*Johnny and his mom don't really exist. I invented them for the sake of illustration. I was inspired by lots of unique people and infuriating experiences I've encountered during my homeschool journey.

carrie said…
LOL - As I was reading your post I was remembering back to August or September when I started handwriting with Christopher on a daily basis. It was painful and I had to watch each stroke to make sure he made it correctly. I have been lax about watching him form his letters lately and noticed yesterday that he has a very interesting way of making a lower case "e." I have to nip that habit tomorrow!

Most of the time he complains about how I make the number 2 and 7. Teaching handwriting means getting rid of our own bad habits too!
November 15, 2009 at 9:42 PM

Veronica Boulden said…
Thanks for the comment. It is so encouraging to know someone else is going though the same thing!!!
November 15, 2009 at 11:27 PM