Skip to main content
Posted by Veronica Boulden on November 03, 2009 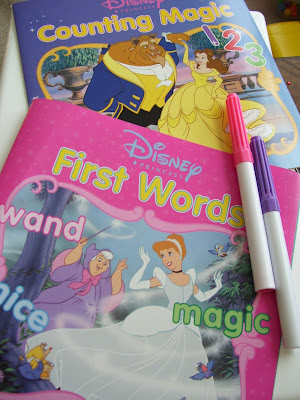 Our loving "Grand-neighbor's" brought Norah and Avril each a bag of treats and presents for Halloween. Norah's bag included these Disney princess dry erase books... Awesome! Our neighbor's are becoming terribly good at almost channeling my mind when it comes to gift preferences. But, as Norah was enjoying her new toys today, I was thinking about the princess stories when something struck me so hard I started laughing out loud. We all know and love these stories, but they don't exactly reinforce the best ideals for little girls. Take Ariel, for example, her story may persuade adolescents to ignore their loving father's advice and continue down dangerous paths, swimming with sharks, metaphorically speaking. Girls may go so far as to pursue interests and boys their fathers don't trust or approve of, thinking their dad and everyone who thinks they are acting foolishly will just be proved wrong in the end. Or take Cinderella. Girls will equate love with infatuation or worse, think the way out of an abusive home life is to marry as soon as they find someone willing! But, I think the most dangerous of all is actually Belle. The overwhelming moral of her story is that with enough virtue, love and dedication, a woman can go ahead and agree to live with a man-beast because she can believe that he will, someday, transform into the prince of her dreams. That said, I've allowed my daughter to see most of the princess films and I honestly don't think I will keep her from seeing the ones she hasn't yet. But, her current Disney favorite is The Lion King and this has to be one of the best story lines when compared to the morals the princess stories teach. I was about to go postal if I heard the song "Hakuna Matata" one more time, but now that I think about it, I have a new love for this film. I am thinking that Norah can watch it as much as her little heart desires now, since it won't be giving her so many bad ideas to work through later.

La Reina said…
You have to remember that Belle was forced to live with the Beast and he let her go. She chose to come back and stay because he changed his ways...But I still agree with all the rest, Esp. Ariel...
November 5, 2009 at 2:00 PM

Veronica Boulden said…
True. She had to do it to save her dad. :) That is one I haven't seen recently and one Norah has never seen, but like I said, we still plan to. Sounds like I may really like it. Question: Were they "married" when she came back to live with him? Now I am just being nit picky, right? LOL.
November 5, 2009 at 2:26 PM