Skip to main content
Posted by Veronica Boulden on November 17, 2009 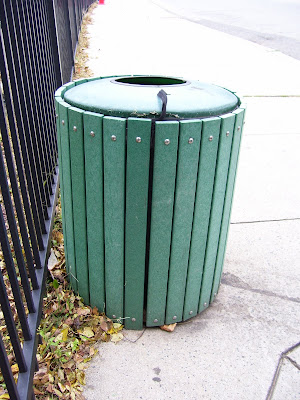 On my way in to work at the YMCA one very cold night last week, I saw a grown man in a suit coat pull the lid off a trash can like this and dig through it until he found a soda can he could turn in for spare change.
There was only one time in my adult life that I wanted to steal something. I was washing my hands at the grocery store bathroom and looked down to see a brand new roll of paper towels under the sink. They were still wrapped in plastic and obviously placed there by a dutiful custodian who noticed that the current roll was running thin. I had seen this kind of thing all the time, but I had never once felt the urge to take anything that didn't below to me. However, this particular day, just minutes before in the same store, I'd spent almost all the money I had left after paying bills, filling my Jeep with gas, etc. to buy groceries and other things for my family (including paper towels) that we needed to get through until the next pay day. But, I was left with only a few dollars in my wallet and I had never been left with so little cash after paying bills, so I was in a brief state of panic. For one moment I thought, "If I just take this roll of paper towels now and hide it in my bag, even though I don't really need it, even though I just bought paper towels, it will be that much longer until I will have to spend all the money I have to provide things like paper towels for myself again." And, I believe that for the first time in that moment I knew at least some of what it feels like to live in a state of want.

I didn't end up taking the paper towels, by the way. I was convinced that that would have been stealing, after all. So, I went home and lived comfortably enough for two weeks with everything I needed. I just had to deal with having less of what I wanted. But, being so seized with the temptation to steal left a real impression on me. I have since pondered with more understanding and compassion the often very obvious connection between poverty and crime, how decent people can be more easily compelled to do things they would never consider otherwise because they don't have basic necessities and can't see any way of getting them without a moral compromise. It is then, I think, that they loose hold of an ability to feel guilt over taking advantage of others who seem to have plenty. They may even rationalize their deeds with arguments like, "Why should they and theirs have so much extra when me and mine don't even have enough?" and that's how they can take what isn't theirs without any hint of shame. In my mind, this doesn't make their actions right, but my brief experience with want (or even the small semblance of it that I experienced that day) makes it easier for me to understand their struggle and the moral dilemmas poverty can often put them in.

With all this in mind, Norah and I read an ancient version of Jack and the Beanstalk a few days ago during her home school lessons. I'd forgotten how the story goes, but was surprised, a little appalled even, that Jack ruthlessly steals from the giant then chops down the beanstalk to make him fall to his death as he chases Jack in an attempt to take back what belongs to him. Later, I found two video adaptations online. The older version was truer to the original text. In it, Jack and his mother are starving, so they take the giant's possessions and kill him and live happily ever after without any apology or attempt to explain away the immorality or injustice in Jack's actions. But another version, a more modern one, shows Jack and his mother are poor, but adds that that is only because the giant drove them from their castle, killing Jack's father and stealing all of their possessions to begin with. So, as Jack takes the giant's possessions, he is only really taking back what rightfully belongs to him. And, as he kills the giant in the end, he is actually just avenging his father's death and setting right the wrongs done to his family long ago. This revisions certainly do the job of making Jack a more palatable hero to our modern consciences, I'll grant you, but that really isn't how the story was told in the original version.

So, I started to wonder, why didn't the original story make any attempt to explain Jack's actions to the audience for which it was intended? Wouldn't they be appalled by Jack's actions, too? If Jack was such an obvious villain, why was his terrible story so celebrated and retold through the ages? My guess, after considering how poverty can warp one's morality or make morality seem like a impractical luxury in itself, is that the original audience, who were very likely villagers in old England, were just like Jack and his mother, so poor that they were, at times, driven to steal in order to survive. And the simple facts that the giant had plenty but was still greedy and hard-hearted was basically all that an audience like that would need to make it easy enough for them to stomach Jack's villainy. I also noticed that the older version in video that I mentioned, the one closer to the original story, was filmed in 1933, during the height of our country's Great Depression when so many people were starving and had no way of making a living. Coincidence? Probably not. The American audience viewing it at the time would have been more inclined to side with Jack as well.

I am still pondering the connections between poverty and crime, asking questions like, "Why is it that most juvenile delinquents come from impoverished areas within our cities?" I figure it can't always be a coincidence. And, I am thankful that here in my warm house with my full belly and with plenty of money in my wallet right now, the lines between right and wrong will continue to remain very distinct for me.
Political