Skip to main content
Posted by Veronica Boulden on April 15, 2010 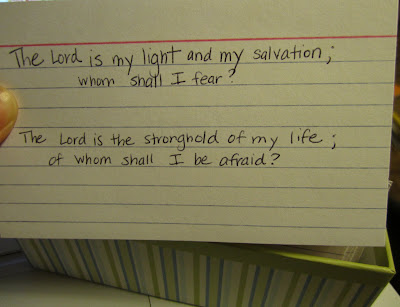 Confident Christians used to bug me. I thought they were arrogant, always claiming their "victory in Christ" and whatnot, always walking around with what I thought must be a manufactured virtue, a fake spring in their step, an artificial smile on their face, always using words like "warfare" and "authority" and "overcome." I think I resented them because they didn't seem to have to work as hard at their faith as the rest of us did. They were never worried about pleasing God. They just lived their lives. And, they were also constantly talking about their faith in very abstract terms, their victories over trials that you never actually see them endure. It all sounded so lofty and supernatural. Try to get them to talk about their set quiet time and they just brush you off. They want to talk about "fellowship with the Holy Spirit" and "worship" instead... Bah hum bug.

But, it turns out that I was wrong. (Big surprise, right?) I was mistaking my own doubt for humility, my own ignorance for knowledge. I've come to realize that God isn't now and wasn't ever impressed with my lack of confidence in Him. I had false humility. I thought God was impressed with my hesitance to move forward when I sensed His spirit leading. I was also somehow ignorant to the fact that God is supernatural and the life He's leading me into, therefore, naturally, will have elements that I will not be able to explain.

But, he was long-suffering toward me. However, at this point, He seems to be asking for a return on His investment, so to speak. He's given me years and years full of reasons to believe what He says, plenty of admonitions to stop indulging in unbelief and apathy and plenty of encouragement and evidence of His love to move forward in faith. In fact, I am being commanded to be confident and to "Move!" So, on I go, from less milk to more meat, walking further into this faith of mine.

Now, I find myself constantly meditating on and quoting Scriptures like, "If God be for me, who can be against me?" or "The Lord is my light and my salvation, whom shall I fear?" I sound so obnoxious to myself. But, lately, these verses are more relevant to what I am dealing with spiritually than anything else I read. I see myself becoming one of those Christians I once misunderstood. But, what can I do about it? I have to talk about my faith in abstract terms because nobody can actually see what it is that Dwayne and I have been going through the past several years. It's supernatural. And, unlike most subjects, I haven't been free to just talk about what's happening like it's a bike ride with the kids or a trip to the park on a sunny day. It's the kind of thing I can't take pictures of or even describe in too much detail, otherwise, I might cause confusion and inadvertently give glory and inspire awe toward the enemy who caused the trouble.

But, what I can tell you is what I told God a while back. I told Him that He is free to make me into whatever version of Christian He sees fit. I came to that point of surrender when Dwayne and I were following God towards a measure of freedom that would cause our more traditional friends and family, even our respected spiritual mentors, who also know and love Christ, who also follow Him, to doubt us. Yet, we still followed God. It was the most painful, pride-wrenching experience we have ever been through. But, we assured the Lord that He could make us "liberals" if He chose to, even as that word put a bitter taste in our mouths.

Recently, though, God has been asking if that offer is still on the table. It seems like He is probing to see just how far we are willing to follow. We've taken our Isaac to the top of the mountain. Now will we prepare the sacrifice? We thought He'd be content with the ground we had already conceded, but now His Spirit is moving and so much so that many Christians we love and respect would probably (and properly) label us not only "liberal" but also "charismatic" at this point: the hand raised, heart abandoned kind, not the fainting, running, shouting kind... at least, not yet. (I say that last part in jest).

But, nothing that God is calling us to contradicts His written word as far as His grace has shown us. In fact, His word seems to confirm our every move, enlightening us about all we have been through and where we are going, so what are we to do but follow? The journey we are on is not ours to direct anyway. It never was, in fact. I was just under some grand illusion when I thought that I could be in control of what I believed or that I had God entirely figured out. I never should have been in control or under the assumption that I knew it all, no matter how right I was sure I had it at one point, I was never supposed to tell God what He could (or could not) proceed to teach me about Himself.

He is the one to be leading. We believers are supposed to give Him control of everything, even that thing which we all hold to be most precious: what we believe about God Himself. He is, after all, the expert on this particular topic. Who are we to tell God Almighty what we should think about anything anyway, least of all what we think about Him?
Spiritual