Skip to main content
Posted by Veronica Boulden on April 29, 2010 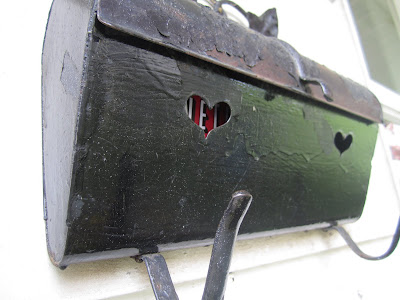 Three Netflixs arrived in the mail the other day. Dwayne and I both got really excited, until he opened them and read the cases, "Big Love. Season 3." I made a noise that communicated my disappointment. (And, I really was disappointed, too, to my own amazement, since I used to love that show.)

Dwayne and I both agreed that we don't pay enough attention to our Netflixs queue. We choose movies months and months and months in advance, so we often change our minds about them by the time they come in the mail. Case in point.

On the couch later that night, from behind his laptop screen, Dwayne says, "I don't think I'll watch Big Love with you. I've got enough images in my head of Bill Pullman having sex with his wives." He put real emphasis on the fact that that word was plural. I chuckled then said, "I know. I don't think I will be able to watch them either." He looked at me in unbelief for just one second, then there was a moment of recognition and he didn't seem that surprised.

Dwayne's had a front row seat to what God's been doing in my life lately. I guess you'd say that God's given me a new desire for personal holiness. It's born, for the first time, not from a sense of obligation to make myself more pleasing to God or a sense of striving to make myself more acceptable to other Christians who think I could or shouldn't do this or that, but it comes, for the first time, out of a real passion for the presence of God in my life, from a gentle nudge of His Holy Spirit urging me to, "Be holy for I am holy." I guess I feel like He's asking me to make more room for Him in my life.

That was the end of it for a few days. The DVDs lay opened on the sofa while we shuffled around them, living our lives, until I had a brief moment one afternoon to put all three of them back into one envelope, unwatched, and back into our mailbox. Problem is, it was already afternoon and the mailman had come. We had new mail in the box. But, I didn't take the new mail out of the mailbox when I put the DVDs in.

I considered the possibility that Dwayne might just grab the DVDs and bring them right back into the house with new mail when he got home. But, Dwayne likes to get the mail when he gets home. Anytime I do it for him, his feathers seem to get a little ruffled, since he doesn't know where the mail is and he yells in a voice that implies he's on the verge of panic, "Where's the mail?!!" and I never really know right off hand and I get all flustered, because I never put it in the same place twice, so I decided to just leave the new mail and the DVDs in there together anyway.

Turns out, Dwayne did bring the DVDs back in with the mail. I wasn't surprised. Like I said, I considered that this might happen. And, Dwayne laid them on the couch with the new mail, right on top of the mail, actually, and the next morning I had a crisis of conscience over the DVDs. There they were, on the sofa, again, staring at me, tempting me to watch. And, I had time to watch them that day...

This is the conversation I proceeded to have with myself or I think it might have been the devil... Take your pick. But, this is just the kind of moral arm-wrestling we Christians have to do sometimes.

"Why can't you watch them?"

"I don't know for sure. I just don't feel right about it."

"Don't accuse me... of being a Legalist. I'm not a Legalist... I don't think. I just don't think there is a Biblical reason that will free my conscience up to watch them."

"These have, to be sure, the appearance of wisdom in self-made religion and self-abasement and severe treatment of the body, but are of no value against fleshly indulgence."

I actually considered this for a second, but, eventually, shook myself out of the daze I was in...

"What?! The audacity of you to use Scripture! What about, "I will set no unclean thing before my eyes." or "Whatever is not of faith is sin?"

"That's what I thought. I can't watch these 'in faith,' so they are going out of this house!"

And, I say that as I am walking towards the door. And, like punctuation on the end of my sentence, I threw the lid to the mail box down as I put the DVDs back in. And, that was in the early morning, so the mailman would definitely be coming to take them away before Dwayne had a chance to bring them in yet again.

A few minutes later, still stewing over my near upset, I said to the devil,

"You were arguing for the DVDs, that should have been my first clue."

* Disclaimer: For those of you who can't read between the lines. I'm not saying it's sinful for you to watch Big Love. I'm just saying that I couldn't do it "in faith" and according to the Scriptures, "whatever is not of faith is sin." If your conscience won't condemn you for watching, watch away! And, I will try hard not to envy your freedom to do so, since I used to feel free to enjoy that show... a lot.

This post was meant to lead you to consider allowing the Holy Spirit to direct your decision making, even in the "small" things. "Over disputable matters" like what DVDs you will or will not watch, we Christians are called to follow our own consciences. I don't think we should ever, ever, allow anyone (the devil or other Christians, even those Christians we consider to be our mentors) to motivate us to do something that our own conscience condemns us for. We believers each have the Holy Spirit and He knows us perfectly. Perhaps He knows that I, for some reason, should not watch Season 3. I don't know. But, I don't have to know to know that it is perfectly right for me to defer to Him in this matter.
Spiritual

carrie said…
I feel that way about Desperate Housewives. The commercials for it pop up when Chris and I are watching a show on the internet. That's a show I can not watch.
May 17, 2010 at 9:09 PM