Skip to main content
Posted by Veronica Boulden on July 22, 2010 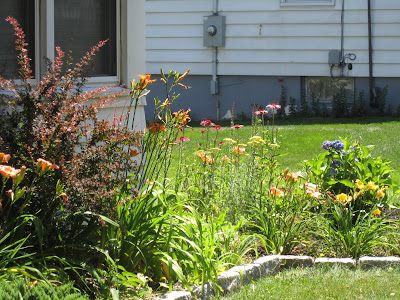 I was watering my flowers very early one morning. The spray from my water hose must have disturbed a moth sleeping on the underside of one of the leaves. I saw the moth fly up into the air over the blossoms and then fuss around disorderly for a few moments, like it was angry at me for waking it up.

With some difficulty, I tried to kept track of it's flight pattern. My head bobbled for a few moments, until the moth landed on the knuckle of my right hand, the hand I was using to hold the water hose. I probably wouldn't have even felt it there, had it not been for the fact that I was looking for it.

Quickly, I switched the water hose to my left hand and lifted my right one toward to the sky, almost by reflex, meaning to direct the moth away from me safely, in the way it wanted to go. But, as I held my hand up, waiting, waiting, the moth didn't take off. Instead, it crawled to the center of my hand and stayed there. I brought my palm closer to my face so that I could look at it square in the eye for at least a moment before it saw me and flew away. And, it saw me. But, it didn't fly away.

As I watched it, it seemed to watch me. But, the closer I looked I saw that the moth was also preoccupied. It's straw-like mouth was moving over my palm, sucking the water out from in between the creases in my skin. I didn't feel any of this, but it made me uneasy to see it's hose flopping all over my hand. I controlled the urge to shake it off my hand, however, and kept as still as possible, not wanting to disturb it and then regret a second later that I caused it to fly away.

To my amazement, the moth stayed and stayed and drank and drank. I knew that my hand was covered in what to me was only a light layer of water because I had been using the water hose and I wondered at how this could be enough water to allow a moth to drink so heartily. The sun reflected off the water on my hand then and I could see that the space where the moth's mouth had been was perfectly dry while the area around the moth's feet was still wet. The moth seemed to realize this as soon as I did, so it lumbered forward a steps, like it was difficult to move while it's hose was still unrolled. The moth stayed in the new spot until it was dry, too, and then it moved again and drank again and repeated this until my palm was completely dry.

While this was going on, I tried not to blink so I wouldn't miss one second of it. But, then I realized that my mouth was gaping wide open and considered that this might not be the best posture to take when a moth or any insect for that matter is two inches in front of your face. So, I closed my mouth and moved my palm a little away from my face, but only a very little. I tried not to lower my arm even though it had begun to hurt by this point.

Once my hand was dry, I was sure the moth would realize it wasn't a leaf and fly away, but it didn't. As I held my hand up to the light, the moth seemed to take a moment, take in his surroundings, take another look at me and note to itself that it was satisfied. So, instead of moving on, it crawled to the backside of my hand and stretch it's wings flat against the back of my first finger. I turned my hand to get the moth back into the light so that I could see it better, but the moth noticed this and scurried a little further down my finger and flattened it's wings again. That's when I realized that it wanted to be in the shade. A moth would want to be in the shade if it was planning to rest, of course, and the backside of my finger was much darker than the front, so I realized he was planning to settle there for the duration.

At this point, I was torn. I didn't want to make him move since he was so determined to stay and since he was paying me a compliment by feeling at ease on my hand. But, I also didn't want to let him get settled and then have to disturb him again when I would have to put down the water hose and move on to something else, which I was bound to have to do any minute. Unfortunately, I couldn't just stand there to let a moth rest on me all day. So, I turned my hand toward the light again and this time blew as hard as I dared, not wanting to hurt him, but wanting to set him to flight. He looked at me with what seemed to be annoyance. He wouldn't go. He scurried back under my hand. I turned my hand again and this time blew a little harder. He finally took the hint and took off.

I went back to watering my flowers then. But, I felt magical and special, a little like a kid and a lot like Cinderella. If I could have carried I tune, I just might have started singing. But, I didn't want to ruin the moment for myself and since I am tone deaf, singing out loud usually ruins any moment for me.

I was thankful to God. It seemed like the curse of sin was lifted for a few moments and the moth and I enjoyed a fellowship, of sorts, for at least a few moments. The thought occurred to me that this must have happened all day long in Eden. Eve was probably free to experience God's creation "hands on" all the time. She might have been able to walk up and take handfuls of a lion's mane like it was a big kitten or something. I just smiled to myself and pondered that and watered my flowers. But, Avril's cries interrupted my thoughts then and I had to put my hose down, shut the water off and hurry back to earth.
Nature