Skip to main content
Posted by Veronica Boulden on July 17, 2010 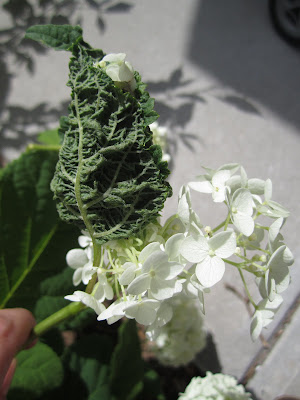 "Let's go look at the pretty flowers," I said to Avril, who was fussing and ready for a nap. We had been playing at the park and I was trying to distract her while her big sister was saying goodbye to all her friends.

I didn't mean for her stroller to bump into the hydrangea bush on my way over to see it, but in doing so, it uncovered this little pod. "It looks like these leaves were sewn together deliberately," I said to myself. "But, there's no way..." I took a quick picture of it and when I had a minute later that day, I searched online.

Turns out, certain caterpillars will "tie" leaves together with silk, so they can hide inside while they feed. Incredible! These "leaf tiers" are usually considered pests, since they ruin the look of hydrangea bushes. In fact, most of the information I could find about them online was on gardening websites where people wrote in to complain that it looked like a bug had tied the leaves of their bushes together. "Yes," the expert would say, "a bug did tie your leaves together..." And then the expert would proceed to tell the people how to kill it. And, even worse, the people would just say thanks and then go kill the bugs.

Not that beautiful hydrangeas aren't incredibly important. I love these flowers. But, I mean, no one, not even the experts, took a second to register the fact that a half-inch long, green larvae not only has the inherent ability to make it's own thread, but it can use it to sew.

"For since the creation of the world God's invisible qualities--his eternal power and divine nature--have been clearly seen, being understood from what has been made, so that men are without excuse." Romans 1:20
Nature