Skip to main content
Posted by Veronica Boulden on July 07, 2010 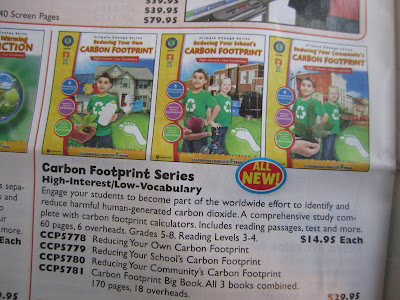 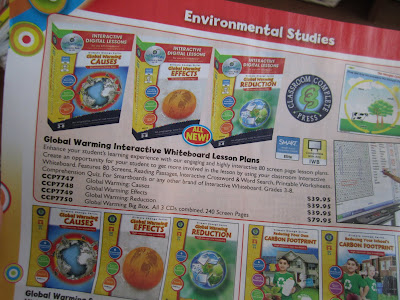 My name and address gets put on some of the same mailing lists as professional teachers, since I often shop at the same stores. But, the ads I get in the mail are not always as telling as the one that came just a few days ago. When I saw the page pictured above in a teacher supply catalog, I got aggravated. I can't pick which John Taylor Gatto quote I want to go along with these photos, because they all seem to fit. Notice the words "high interest" and "low vocabulary" function as selling points for these new environmental studies units. Really?

And I'd like to know what the teachers who use these materials are taking out of their lesson plans in order to fit entire units on hotly-debated issues like "climate change" and "global warming." They must be sacrificing weeks worth of material to make room for this new stuff. I taught school for two years and I had to haul butt to get through the most obvious and accepted and essential of science lessons like insects have six legs, spiders have eight and lava is molten rock.

If anything was added to our already-packed curriculum, if the administration wanted to rehearse for a play or practice for a holiday program, whatever it was, something else that was important had to be squeezed out of the school day in order to make room for it. And, there was never enough time to make up for what was "lost." So, are schools planning to make their already inefficient days even longer? Are they really free to give priority to this material over something else like the cause of ocean tides or how to read a compass?

Teenagers are graduating high school thinking Homer is a Simpson and most college prep students can't tell you off the top of their head what ten percent of one hundred is. (I know this because I was numbered among those graduates. And, since then, I've had to teach myself everything I didn't learn in school.) But, I did learn some things. If you said "gun," my next word would have been "control." And, if you say "carbon" to today's graduates, their next word will be "footprint" without even blinking. So, there is no question that they are taking some things with them. And we can learn a lot about the problems with today's schools by asking what those things are.

Now, I usually don't want to be numbered among those who choose to homeschool because they think there is some agenda to brainwash the next generation, to make them stupid, to mold them to buy certain products, to train them to be nothing more than wage earners, to indoctrinate them to be a certain kind of voter... but upon seeing this kind of thing marketed to teachers, so it can be taught to the next generation in place of something else, one has to wonder. Could those suspicious homeschoolers be right?
Political