Skip to main content
Posted by Veronica Boulden on July 09, 2010 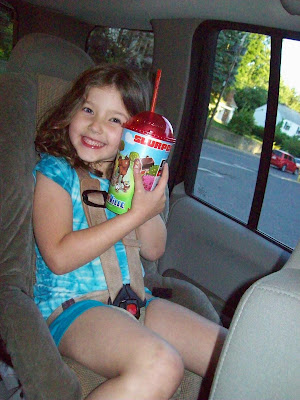 So, my brother calls me up and asks me to drive to 7-11 and get certain products so he can have the codes off the back of the packages. I laugh at him and say mean things and hang up on him because he must be kidding, right?

He calls me back a few days later and asks again. I tell him to go to... 7-11 himself. His answer to this is, "The closest 7-11 to where I live is two hundred miles away." I say, "Well, I don't know if there is a 7-11 near my house either?!" He says, "There is one five minutes from you" and he rattles off the street address by heart.

And, I realize by this answer that he has not only done more than one Google maps search to find out where the closest 7-11 is to me, he's also not kidding about me buying him products so he can have the codes. I said some more means things to him and hung up the phone again. What kind of nut would expect me to drop what I am doing and... Wait? Did he say "Slurpee?!"

So, I called him back and agreed to buy his products on two conditions; first, that he pay for them and second, that he release me from every promise I made to him when I was five and when I begged him for the candy or the toy or the money or whatever it was that he had that I wanted that caused me to want to basically sell all my birthrights to him back then!!!

He hesitated. These promises I made had become precious him and he enjoyed annoying me with them through the years and holding them over my head and bringing them up at family get-togethers.

But, I didn't back down. I played my hand. I told him, in my most serious voice, "You have the power to choose" and said that I'd let him think about it for a little while, but that I was going to call him back after dinner and that he should pick up the phone because I didn't know whether or not I'd change my mind about the whole thing.

He growled at me like a wounded animal, but I hung up anyway. I was the one making the deals now. (Evil laughter).

I called him back after dinner and he answered on the first ring. He agreed to my conditions and not only that, but I put him on speaker phone and made him tell my whole family out loud; both our parents and my husband, that I was released from those promises we had all heard about one million times and that he would promise to never bring them up again.

It was a terrible day for my brother.

It was a day of great victory for me.

It was a day my family will laugh about forever.

And, it was the day Norah had her first Slurpee.