Skip to main content
Posted by Veronica Boulden on April 03, 2011 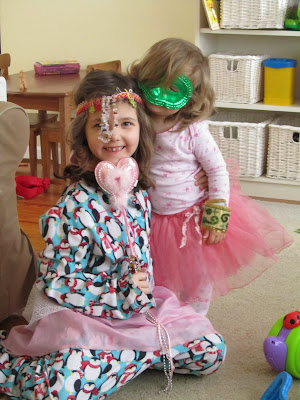 A photo of my daughter Norah and her baby sister Avril playing dress up this morning. Keep in mind, Norah is home schooled, so she has no idea that she should be embarrassed by this photo.

The article at this link is a little sarcastic and one sided. If I sent my kids to public school, I'd be miffed by it. But, it makes some interesting observations, none the less. I hadn't realized that my home schooled daughter was as weird as she really is until I read this article and was reminded.

You see, my daughter has no idea who Justin Beaver is. (I know it's Bieber.) But, for real, she doesn't know he even exists and I have no plan on telling her.

She could care less whether or not her clothes say Abercrombie. (Just as long as her shirt is pink. It must be pink. Or have horses on it... but most of the time she is in pajamas anyway.) Her self esteem is entirely independent of what she has on. She doesn't even know that people connect their self-esteem to what they wear. (This is another secret I am quietly keeping from her.)

She is nice to every kid she meets at the public park and doesn't understand why some kids seem to think it's "cool" to be cruel to her at first (until they get to know her and realize she isn't a freak.) She doesn't understand playground politics and has no concept of how nice people can be anything but nice all the time. (I don't understand this, either, really.) Her home school friends don't treat each other this way. Ever. They just play. "You're here to play. I'm here to play. Okay, let's play." That's the extent of home school playground politics.

My daughter is also nice to little kids. She plays down to them without feeling weird about it. In fact, I never feel any hesitation to take her baby sister Avril to a play date "for Norah" because Norah's home school friends always play really well with Avril, too. One of Norah's older friends, in particular, seems to enjoy playing with Avril even more than he likes playing with Norah. He and Avril are the best of friends and it's a joy to watch them together. Home schooled kids, on the whole, seem to actually enjoy playing with kids who are younger than they are... It's weird, I know. But, I hadn't realized it was weird until I read this article and remembered that it is, in fact, not the way things usually are.

But, probably the weirdest thing of all, is that my daughter looks adults in the eye and talks to them like an equal. She even has the gumption to correct them, at times. Gasp! It's nothing too disrespectful. But, some adult will say to her, "I bet you had a lot of fun at the park today!" And, instead of saying, "Yes." and smiling, she says, "No. I had a terrible time, actually. I fell and hurt myself and it was way too hot and my mom forgot to bring water..." (I am trying to work on this with her because I see how some people respond to her confidence. They are really offended by her because kids are supposed to know their place, just smile and nod and be silent and uninterested. I had forgotten that it's impolite for a kid to be so engaged.)

Anyway, I guess my home schooled kid is weird after all. But, I am not sure I want her to be normal anyway.
Homeschool