Skip to main content
Posted by Veronica Boulden on September 07, 2011 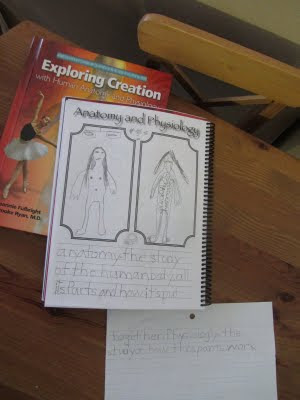 We had done only two days worth of Norah's new science program, Apologia's Human Anatomy and Physiology, and I was already feeling very negative about it. I called my sister-in-law very stressed out and after talking to her, I think, I think she has made me feel better about the issues I was having.

The first negative for me was the amount of reading. So much reading! Even I, the teacher/adult, began to hear the words, "Blah, blah, blah..." instead of what I am actually saying it was so much reading!

My sister in law explained that this anatomy book is probably the most advanced book Apologia offers for the elementary years and with that in mind, she isn't even going to use it till her kids are about to go into middle school, etc.

She suggested I cut down the amount of material each day and cover in four lessons what the book suggests I cover in two. I agreed that that would work, but realized later that that will seriously affect my tidy home school schedule. To cover the same material in one year, we will need to do science almost everyday, as often as needed really, instead of only twice a week.

I think I can do that.

But, besides all the reading, I noticed the fact that the notebooking pages did not give the student directions on how to complete them or even offer suggestions for what to draw or write on the pages. Norah had to complete the page above labeled "Anatomy and Physiology" but she was given no idea what she was supposed to draw in the two boxes or write on the lines under them. This was very stressful to us both for about ten minutes, until we decided together how to best fill the boxes and the lines with content.

Norah ended up drawing the outside of a body and the inside of a body (as far as she understands what's inside). I suggested she define the words "anatomy" and "physiology" but that wasn't the best suggestion really because the definitions are so very long that the science class turned into a handwriting challenge and there wasn't even enough room for the definitions on the page, so Norah needed another page...

All this was very confusing to me and Norah both until my sister in law explained the obvious. This is a journal, not a workbook. That should have been obvious to me since the cover says "journal." Kids are given spaces to fill with whatever they want, whatever was interesting to them, whatever they retained. There are no right or wrong answers. The fact that there are two boxes on this page today does not mean there are two specific images the publisher has in mind for Norah to draw today. There are just two boxes. The kid can fill one... or both... or neither.

I think I get that.

So, after talking to my sister in law, I think I can live with Norah's science program after all if I can just learn to be more flexible.

I think I can do that.