Skip to main content
Posted by Veronica Boulden on February 05, 2012
Dwayne bought these speakers that plug into my computer and make whatever we are listening to on my computer much, much louder. Up till now, I couldn't use my computer's speakers to listen to recordings of audio books and the like because the computer was never, ever loud enough. I had to burn CDs and then play them on a CD player just so the kids and I could hear them. Now, I no longer have to burn CDs and it's been great! As you can see, we have the speakers on the top of the cabinet in our kitchen since that's where we are doing school most of the time this winter. My guess is these speakers will move around the house with us as we move around the house with the seasons. 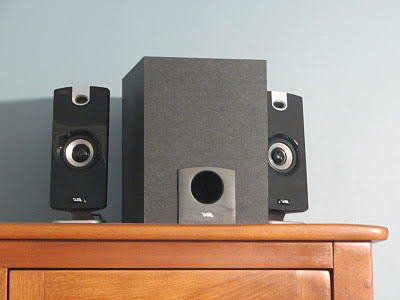 I've been using the speakers to play classical music through my computer in the background while we're doing our school work. It occurred to me that this is the best and probably the only way we will ever become familiar with the various composers since we don't actually stop everything we are doing and just listen to classical music in our free time. 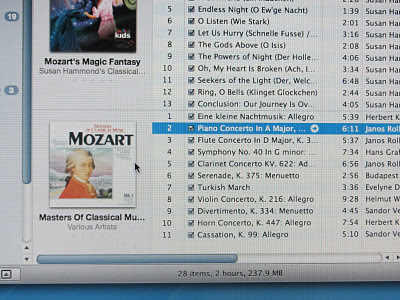 We were listening to Mozart all week, so we took some time to read a page about Mozart in our book The Story of the Orchestra. We also listened to Mozart's Magic Fantasy, an audio drama based based on the opera "The Magic Flute," but made especially for kids. The character's sing to Mozart's famous tunes and tell the story of the opera in English. 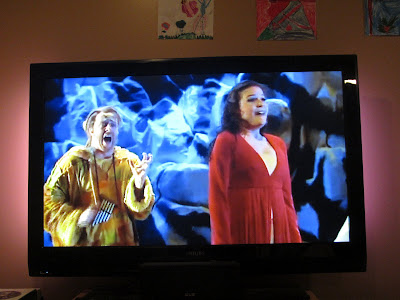 This audio drama for kids peeked our interest in the original opera. It seemed like it might be easy enough for Norah to watch and even understand in it's original form. So I looked and found it on You Tube. Norah and I watched one half of it one day, the other half the next. And, with the help of subtitles, we understood it all!

We also checked out some books about Mozart from the library.

I didn't expect that just listening to classical music in the background would lead us to all this other stuff, but it did and I am glad of it. I think we've found the most natural way (for us) to add the study of classical music to our home school. We'll move on from Mozart to another composer once our interest-based study on Mozart runs its course.
Homeschool