Skip to main content
Posted by Veronica Boulden on February 20, 2012 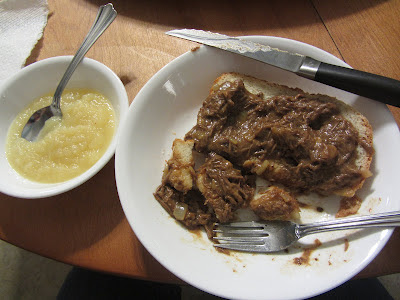 I made a pot roast the other night using two packets of beef gravy mix, a small onion, chopped, and a cup of water in the crock pot for eight hours. Simple. I served the roast with green beans and potatoes.

We had tons of meat left over, so I decided to save what was left of the meat and make open faced roast beef sandwiches later in the week. (That's the thing about bigger pieces of meat. They may be more expensive but you get at least two dinners plus several lunches with the leftovers.) So I just took everything that was left in the crock pot and transferred it to a Tupperware and kept it in the fridge for a few days.

On the day I wanted to make the open faced sandwiches, I baked some fresh white bread in the bread machine. Then I used this gravy recipe to make beef gravy in my skillet. When the gravy was thickening, I added all the leftover beef to it, mixed and mixed and heated it all though. Note: I added even more water than the recipes says to thin out the gravy even more to suit my taste.

I sliced the bread and spread the steaming roast beef and gravy mixture over it. I served it with cold applesauce on the side. The picture does not even do justice to the tastiness of the beef and gravy. It looks gloppy in the photo, sadly, but it wasn't gloppy at all. I was really mouthwatering.

If you eat meat, try this. Slow cook a roast and serve it with your favorite sides one night then serve the left overs with gravy over bread or toast another night with another simple side. You'll get (at the very least) two delicious dinners out of one pot roast.
Recipes