Skip to main content
Posted by Veronica Boulden on February 13, 2012
If you hadn't already heard, I'm doing e-mealz this year. It's really working for me. But I also have to work to make it work for me.

Here's what I mean. 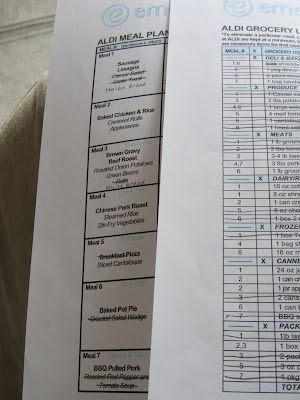 I usually have to alter the meals to suit myself and my family better. So I print out their list for dinners each week and follow their suggestions in general, but mark through/ add things to certain days as well.

Notice the photo above. On the first day, I plan to make "sausage lasagna" like they said, but I marked through two items they suggest "Caesar salad" and "garlic toast" and I added "french bread." I won't be making salad since being pregnant, all lettuce now makes me throw up this trimester, and I'd rather make a loaf of french bread in my bread machine than buy pre-made garlic toast with all that butter and salt and preservatives in it.

I realize that another lady probably wouldn't feel compelled to make these marks and notes on the list, but the marks and notes really help me focus on what I will be making right away and keep me from getting confused.

So I have to adjust all the meals this way (unless I happen to like everything they suggest.) 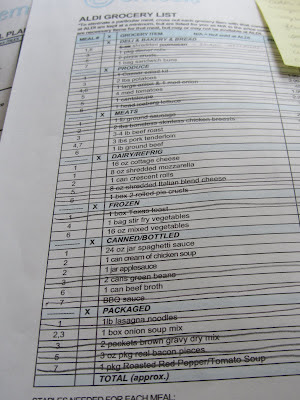 I also go over each item on their shopping list and mark through the ones I won't need, either because I changed the plan and I am not going to be making that item or because I already have it in my pantry.

Going over the list item by item takes real work every week. I have to go downstairs to the storage room and count how many cans of green beans are still there, etc. but I have a much better idea of what is in my storage and in my cabinets now because I am doing this weekly.

And if you look at the photo above closely, you see that I was able to drastically reduced the amount of items we had to buy this week to make just as many meals. So I am saving us even more money and ensuring we don't buy any more groceries than we really want or need. It is now a very rare thing for us to throw out unused food or uneaten leftovers. It happens some, but no where near as often as it did before we used e-mealz, before I was paying weekly attention to our plans. 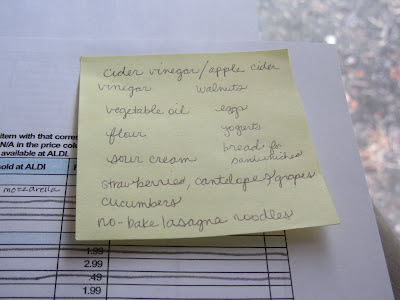 To make e-mealz work for me, I also need to make a small list of items that I want in addition to or instead of those on the list. Note that I wanted to use no-bake lasagna noodles instead of the regular kind they suggested. And I have to shop for breakfast, lunches and snacks, too! But you see that the separate list isn't too big and with all the items I took off their shopping list, we have more than enough room in our budget for this stuff. We can often get a good number of lunches and breakfasts for the same price of all their dinners.

One of my main concerns with using e-mealz at the beginning was that I would not like someone else deciding what we ate. But, interestingly, I am finding that that was not the biggest hurdle to get over. I think the most significant problem for me was that I was not already in the habit of working through a meal plan every single week. I did make meal plans and try and keep an eye on what we already in the cabinet and use it up, but it turns out that I did it only once every week and a half or two weeks. Doing meal plans every single week has meant more work more often, but the work more than pays for itself in the savings. We are saving so much money with the help of e-mealz! It was kind of unbelievable until I started doing it and seeing for myself.
Cheap Thrills