Skip to main content
Posted by Veronica Boulden on March 16, 2009 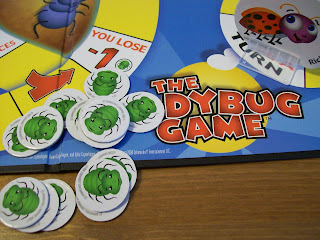 Aphids from The Ladybug Game.
The newest word in Norah's vocabulary is slave.

As we played The Ladybug Game the other day, she said, "These aphids are slaves to the ants... right?"

If you didn't know it, this is actually true in nature. Aphids are taken captive by ants who make them work as slaves in their colonies. It's pretty fascinating.

By chance, Norah's also learned this word from another source, her video, The Prince of Egypt, which tells the story of the ancient Israelite's captivity or slavery in and later, their exodus from, Egypt.

Norah is a tad obsessed with this story right now. She wants to talk about it all the time. We spent about an hour and a half talking about it before bed a few days ago. No kidding. I may have fallen asleep a few times in the middle of our conversation. I don't remember. We were snuggling in bed together after reading a book. But, I do remember that Norah asked an interesting question about the movie, or story, of the Exodus.

"Mom. Why did the people run away from the soldiers? Why didn't they turn around and fight?! The soldiers could have caught them!"

I answered the obvious, "The Israelites didn't have weapons. Their only choice was to run."

To this, she asked another, even better question, "Why didn't they have weapons?"

I answered before I really thought about it, "Well, they weren't free. Before they left Egypt they were slaves..."

And then it hit me like the Red Sea fell on my own head.

To be free is to be free to defend yourself.

The inability to protect yourself is actually part of the word slave's meaning.

Slave, noun. -from the Slavs who were frequently made slaves by the Germans.

1. A person held in bondage to another; wholly subject to the will of another; held as a chattel; has no freedom of action, but whose person and services are under the control of someone else.

2. One who has lost the power of resistance; one who surrenders himself to any power whatever; as, a slave to passion, to lust, to strong drink, to ambition.

The power of resistance or the freedom of action is, for me, a critical part of my political freedom. And, I feel this issue is critical for every free person, even those who may never choose to own weapons for defense. God help us. He will have to part more seas for common men if we Americans allow our government to make inconvenient and even impossible our ability to exercise our 2nd Amendment rights. At that time, we will no longer be able to call ourselves "citizen." We should more accurately be labeled "subject."
Political