Skip to main content
Posted by Veronica Boulden on March 04, 2009 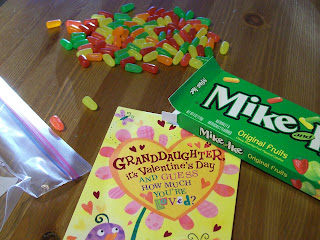 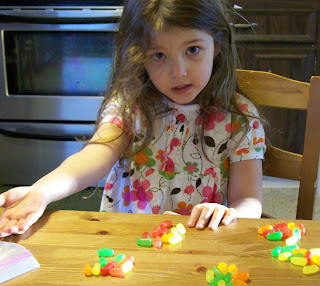 Several days ago, Grandmom Evans sent Norah a Valentine's card with five one-dollar bills inside. We happened to be going to the grocery store a few minutes after we opened it, so I let Norah take one of her own dollars to buy some candy. She picked out a box that was "Nine... Five... 95, Mom!" I asked her if 95 was "less than 100 "and she agreed that she had enough money to get it.

She ate plenty of the candy from the time we left the parking lot until we got back to the house, so I made her stop eating it for that day and transfer the left over pieces from the open box to a Ziplock. But, as she did this, I suggested she make piles of ten on the table, to see how many pieces she had left. Turns out, she had exactly 100 pieces left, ten piles of ten. I couldn't have planned it better if I'd counted them out myself. She's learning to count by ones and tens to one hundred right now anyway.

Then, she proceeded to read the candy box. She's trying to read everything lately. This morning, it was my bottle of lotion "Sweet Pea" from Bath and Body Works. The candy box couldn't have been more fitting, either. "Mike" and "Ike" were both great words to review the phonics rule she's learning: When a word has two vowels, the first one says it's long sound... And, "and" is even a sight word she's putting to memory right now!

So, from now on, when more experienced home school moms claim to use "real life" situations to teach their children, I won't scoff at them so hard. Confession: I used to think that "real life" was just their excuse for not planning a more formal lesson for the day. Gasp! But, I'll admit it now. With experiences like the one I just shared under my belt, I am beginning to see that real life can be an effective teacher. It really can do as much, or more, to reinforce the things homeschooling moms are trying to get across. And a mom need not plan quite as much formal work, since real life offers so many hands-on, meaningful learning experiences.

It's almost as if worksheets and the like were created out of necessity for students who were put in an environment where it isn't practical to learn these same skills using real objects and events... And so, is it possible that home schoolers don't have to do things exactly the same way kids in school have to do them in order to learn?! I'm winking.

I guess I'm starting to get it.