Skip to main content
Posted by Veronica Boulden on July 20, 2009 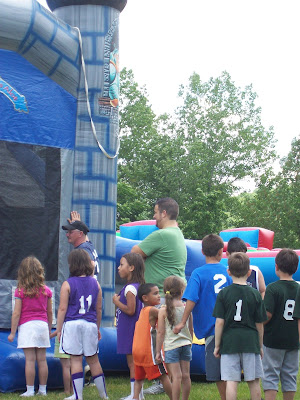 "I can always tell the children who've been to kindergarten from the ones who haven't," a first-grade teacher told Susan.

"Are they that much further ahead?" Susan asked.

"No," she said, "But they already know how to stand in line."

-Excerpt from The Well Trained Mind

The picture above was taken at our neighborhood park's opening celebration a few weeks ago. Norah was waiting in line for another turn on the jump castles. To my knowledge, this was the first time she ever had to stand in line by herself. And it showed.

At first, she'd stand in all the wrong places, unable to figure out where the lines ended then blended, as they do, into the crowd. She'd stand beside kids in line, behind adults who were, clearly, not in line. She'd wait and wait, then look up at any adult who was nearby, expecting them to know if it was her turn to go, expecting them to look out for her the way Mommy does and tell her it was time to move ahead. She didn't realize it was survival of the fittest out there and most of the adults were probably not even paying attention to their own kids, let alone her.

More than once, she'd look back at us and think of something she wanted to say. She'd get out of line right before it was her turn to go and run over to tell us. The kids behind her would stare in disbelief. She'd given up her place in line! But, then they'd realize her spot was empty and they'd turn and rush into it. After she told us whatever it was, she'd run back to the end of the line, when she could find it, unaware that she'd just missed her turn. It was almost as if standing in line were as novel and fun for her as the bounce house was for the kids around her.

Dwayne got up from his chair to coach Norah a few times out of pity, other times out of necessity. It didn't take long for her to catch on and within thirty minutes Norah was navigating the lines like a pro. But, on one instance when Dwayne went up to help, another mom nearby looked at me, seeming to beg the question. Norah didn't appear to be slow and she obviously wasn't a toddler, so why was a kid her age struggling with something so... remedial?

I smiled at her and answered the look on her face, "We homeschool my daughter. She's never stood in line." The lady said what most people do when they find out Norah is homeschooled. "Oh!" Then, looking at Norah and understanding, she went on to reply, "Well. She's never had to." I nodded and turned back to Norah and her dad. But, the lady kept gaping at me, so I could tell she needed more.

The expression on her face said she thought I was a bit too calm about this now-apparent gap in my daughter's know-how. I chuckled and said, "If I had to choose, I think I'd rather her be good at reading, you know, than good at this." With that last word, I motioned toward the line and the bounce house. We both looked back to Norah then, just as the man guarding the entrance waved her in. She looked over at her dad and he nodded to her once. That was her cue, so she was through the flaps and bouncing in a flash.

I didn't mean what I said to the woman as an offense, but I believe she may have taken it that way because she didn't say anything else. She walked away by the time Dwayne got back to me. I'll say here what I wish I'd had the chance to say to her next. Obviously, a child who goes to school can learn to love to read and learn to stand in line. The two lessons aren't always mutually exclusive. But, these days, for my comfort, they too often are.