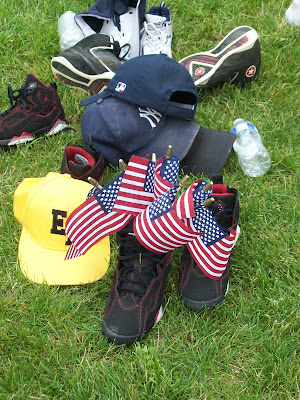 A few weeks ago, we attended our park's grand opening. There were kids everywhere. Most of them go to the local elementary schools and play for our neighborhood's sports leagues after school and on weekends. The kids wore their jerseys and marched in the parade. All of them waved little American flags. That scene was pretty heart-warming for me, while it lasted.

Later in the day, when it was time for the jump castles, the kids abandoned their shoes and hats and disposed of their flags, leaving them lying all over the ground. As they fought over places in line, they started trampling the flags under their feet, spreading them around, getting them dirty, lodging them into the grass. Some of the kids actually noticed what they were stepping on since the little poles were jabbing them in the bottom of their feet, but they didn't bend down and pick them up, they just kicked the flags out of their way and went on rough-housing.

As you can see, I couldn't stand it, so I picked up all the flags and tried to keep them off the ground by propping them in a shoe. A few minutes after I took the photo above, I came back and found them on the ground again. I guess the kid who owned that high top must not have liked them there. At this point, my blood reached a boiling point and I just picked up all the flags and took them for myself, almost daring somebody to confront me about stealing the kids' souvenirs.

Now, I realize public education is an easy target and I grow weary of taking aim at it, believe it or not. Kids getting shot, teachers sleeping with students, students beating up bus drivers, and I am not even mentioning the loads of things I endured while there, since those incidents actually seem somewhat trivial in comparison to the headlines these days. I really don't want to drag the school system through the mud, kick it while it's down, so to speak, because I am not entirely convinced homeschooling is the way every family should educate their children. There are good public schools out there. I think there must be.

And, more to their credit than to my own, I even manage to maintain friendships with people who send their kids to public school. I respect them as diligent parents and they gracefully tolerate me even though I could be a self-righteous nuisance to them about this subject. So, for the sake of peace, I usually ignore nine out of ten things that cause me to think and throw my hands up and say to my husband, though usually in private, "That's why I home school!" But, I can't ignore this one. It seems too fundamental to overlook.

What are the teacher's around here using the hours and hours spent in history and social studies classes to teach kids, if not this? These are government-run schools, for goodness sake! The kids say the pledge every single morning. I'm entirely bewildered and incensed by so many of the next generation treating the flag with such disregard, such disdain. If anyone should be learning respect and esteem for our country's flag, shouldn't it be public schooled children?
Posted by Veronica Boulden at 12:00 AM