Skip to main content
Posted by Veronica Boulden on July 21, 2009 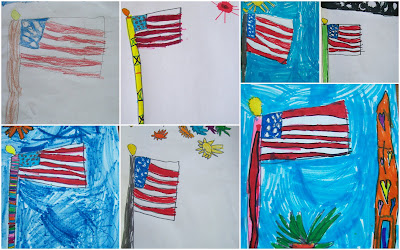 Norah's room is right across the hallway from ours. This last Saturday, she woke up singing "Proud to be an American" by Lee Greenwood. Her dad woke me up to listen to her. So, he and I were both trying not to laugh too loud.

Norah's version went like this. "I want to be an American, where at least I know I'm free... and I gladly stand up and offend her still today..." She got all the other words in the chorus right, though.

We made a CD of patriotic songs for Independence Day and we have been listening to it when we go places in the Jeep, so Norah has learned several songs. And, as you can see from the collage of pictures above, her new favorite thing to draw is the American flag. On the way to church, while listening to "You're a Grand Old Flag" I heard her say, more to herself than to us, "I love the American flag."

The picture on the bottom right is my particular favorite. Her dad and I generally have a hard time separating our faith from our patriotism. In fact, many of the songs we have been listening to like "My Country 'Tis of Thee" and "Battle Hymn of the Republic" don't even try to distinguish between love of God and love of country, so I think Norah's picture of the chapel next to the flag shows insight.

She said one other thing on the way to church Sunday night that made us laugh out loud. "The Star Spangled Banner" came on and Norah identified it as the song "We have to put our hands over our heart to." Later, "Proud to be an American" came on and in the middle of it she said, "I know this isn't the song we are supposed to put our hands over our hearts to, but when I hear it, I feel like putting my hand over my heart anyway." Her dad assured her that it was completely okay with him that she felt that way.
Humor Political