Skip to main content
Posted by Veronica Boulden on July 31, 2009 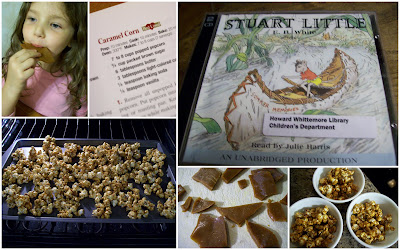 We made caramel corn to snack on while we listened to some of Stuart Little on audio disc. Dwayne used the extra caramel to make homemade sugar daddies.

I should clarify one thing, because my dad, who reads and studies my blog more carefully than most, will see what appears to be jagged shards of caramel in the picture above and get upset. For his sake let me say that we do not let Norah have the small pieces of caramel, those are reserved for Dwayne. Furthermore, we do not ever allow her to put the pieces we do give her all the way into her mouth, no matter how small or soft they get after she's been licking them for awhile.

Some of you may wonder at this exposition, but it turns out that my nervous father chocked on a peanut when he was a kid, had his airway blocked, had to have a tube put in his trachea, almost died, etc. Therefore, I try and respect his concerns and head them off.

Naturally, I resented him as a child because he never let us have hard candy and would take two thirds of our Halloween piles since most of it wasn't attached to sticks. I got to have a jolly rancher every now and then, but only when one of my parents had the time and inclination to watch me like a hawk till I was completely finished with it. And, as you can guess, that didn't happen much.

As often as I said, "When I have kids, I'll never..." my dad will be relieved to know he's passed on at least this one of his hang ups to me. Norah doesn't get candy often and when she does, I keep her under constant surveillance till she's done.

So, you can breath easy, Dad.