Skip to main content
Posted by Veronica Boulden on July 14, 2009 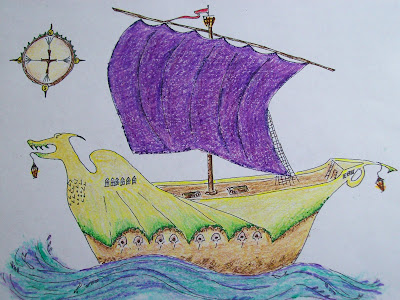 We're listening to The Voyage of the Dawn Treader by CS Lewis on audio disc. This is the third book in the Chronicles we've heard so far and it is supposed to be the last book with any of the Pevensie children as characters.

The story starts as Edmund and Lucy and their obnoxious cousin Eustace fall into a magic painting on the wall. "It was a picture of a ship... Her prow was gilded and shaped like the head of a dragon with a wide-open mouth. She had only one mast and one large square sail which was a rich purple. The sides of the ship... where the gilded wings of the dragon ended - were green... She was obviously running fast before a gay wind..."

Norah loves to draw and so do I, if I can find the time and if the house is neat and quiet enough for me to sit and concentrate. While Avril took a nap yesterday, I sat with Norah and we drew for almost an hour. I made this color sheet of the Dawn Treader.

If you'd like a copy, click on the image below to enlarge it. Then right click and "Save Image As..." to have a printable version on your desktop. 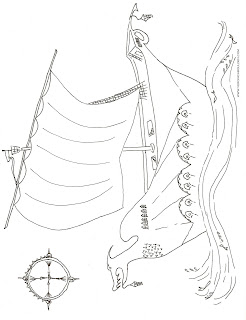