Skip to main content
Posted by Veronica Boulden on August 08, 2009 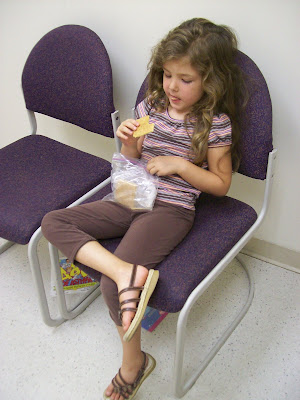 Norah is snacking on graham crackers in the pediatrician's office.
We've had about twenty ants in our house this summer. When we see them, we squash them in a napkin and move on. Now, twenty ants might not sound like very many. But twenty is, in fact, about ten times more ants than we had last year, considering the fact that we might have had a total of two bugs of any kind in our house during the whole summer. So, I guess that explains why Norah has the impression that our house is full of bugs and why she said what she did to to our pediatrician the other day.

"Do you know something?" Norah says to him.

"What is that?" the Doctor looks down, all smiles.

"We have hundreds and hundreds of bugs in our house right now!" Her voice growing louder and louder, her arms spreading wider and wider and her eyes getting rounder and rounder with each "hundreds."

You may also be wondering how I managed to deal with the situation and I will tell you... with all the grace and skill of an ATF agent diffusing a live bomb, that's how!

Before we left, the doctor and I were able to joke about Norah's comment, however awkwardly. I told the him he should write down the crazy things kids say, so he'd remember them over the years. He seemed to like the idea. I also asked him if Norah's comment was the worst he'd ever heard. He was gracious and said "No." But, I suspect he was just being polite. If he does take my advice and start recording the comments he hears from his young charges, I fear Norah's may actually go down in history.
Humor