Skip to main content
Posted by Veronica Boulden on August 12, 2009 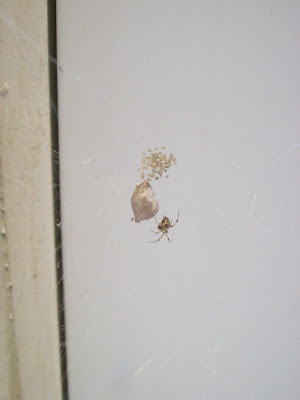 This tiny spider spun its web inside our back door. I saw it every time I went downstairs to do laundry and whatnot, but it took me a while to get around to doing anything about it.

In the meantime, Norah was keeping tabs on the little spider, diligently, first out of fear and suspicion. But, that quickly turned to interest and fascination, which eventually morphed into concern and affection. She actually got attached to the little lady, so attached in fact, that when I finally did get around to cleaning off the web and smashing the spider, Norah launched into hysterics screaming, "You can't kill my Charlotte!"

Well, that was just precious to me. And, you may call me crazy for doing so, but I decided to let her have her way. We don't really use the back door anyway, I reasoned with myself. That was why the spider was there long enough to weave its way, no pun intended, into Norah affections in the first place. I also knew, sentimental as she was about this eight-legged buddy, Norah was still fearful enough of spiders not to get close enough to actually touch it. So, I figured there was little chance in her being bitten or anything like that.

So, for the next few weeks, I let her "keep it." Norah would sit on the foot of the stairs right in front of the door and watch her spider. She'd talk to it lovingly when she thought I wasn't around. She'd shout its current status up to me.

"She's caught another spider in her web!"

A week or two ago, she told me she thought her spider had made an egg sack. I was doing dishes at the time and said something like, "Oh, that's nice." But, didn't go investigate.

A few days ago, however, she ran upstairs saying the eggs had hatched, the eggs had hatched... and the baby spiders were "Everywhere!" Well, with that, I figured it was about time that I check things out. I was beginning to doubt myself for indulging Norah as long as I did.

"What was I thinking letting her keep a spider as a pet?!"

Turns out, Norah was right. The little devils had hatched and were getting ready crawl all over our basement. In the nick of time, I convinced Dwayne to put down the can of Raid and get a cup to remove them mercifully, so Norah wouldn't be traumatized. He rolled his eyes and agreed to take them outside and let them "go free."