Skip to main content
Posted by Veronica Boulden on September 26, 2009 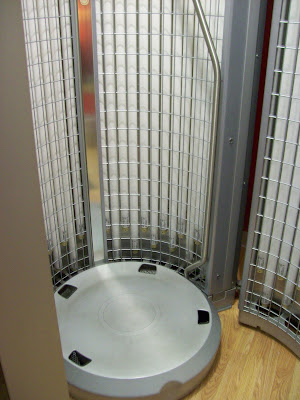 Have you ever been so terrified you couldn't function? I was that terrified earlier today.

We have a formal wedding and reception to go to this Thursday and I found a pretty dress, but to look nice in it, I need a tan. I can't go to the beach here in Connecticut. It's been way to cold for that for at least a month now, so I am going to the tanning booth. But, I had never been tanning before, even for my own wedding, so the last two days were my first experience with the process and turns it out that I am terrified of it.

You know that feeling you get right before you get locked into your seat on a roller coaster? That's nothing compared to the panic I've felt the last two days. I literally have to force myself to go through with it, since I know going five times in my life won't kill me... will it?

My knees knock, I can hardly breath and I am extremely close to a panic attack right before they turn on the machines... Keep that in mind as I tell you what happened earlier today on my second trip to the tanning salon.

I took Dwayne and the kids along. I joked that I needed them there for moral support and just in case I screamed. But, really, I just thought we'd all stop by there together and then get right on with our day once I was done. Turns out I was right... about the first thing.

The machine turned on before I was in it, before I had my eye protection on, even before I had my special sun block on in full. The goggles I was given didn't have a strap, since the bed was horizontal and the goggles are supposed to just lay on your face. I was already scared before the machine turned on early, so I freaked out when it came on and couldn't think clear enough to hold my goggles with one hand and open my eyes through the special lenses to find the switch to turn the machine off with the other... When Dwayne found me, after I'd been yelling for at least a minute, I was cowering in the corner of the room naked, with my T-shirt shielding my eyes. He managed to convince the lady to turn the machine off after that. Why she didn't hear me asking her to do the same thing so loudly, I don't know.

I immediately got dressed and was ready to demand a refund, leave and never come back, but the lady convinced me to try the standing bed pictured above. Since the glasses she gave me for that bed would stay on with a strap, allowing me to use my arms and since the OFF button was so clearly labeled, I agreed. That bed wasn't as bad, since I could stand, raise my arms and move around and it didn't feel so much like a coffin, but I still have the shakes thinking about having to go again tomorrow. Even with the extra space in the standing machine, the idea of the artificial lights really bothers me, it feels so unnatural to harm myself so I can be more "beautiful." I honestly don't know if I can go through with it again.

Amy Wilson said…
Funny, Veronica. I don't like them either. I used one for HS prom one year and hatedit!I kept wondering why I wasn't really getting any darker and finally realized I was suppose to close the lid! :)
September 27, 2009 at 7:00 AM

Veronica Boulden said…
Ha! Ha! Ha! I think a person's experience depends a lot on the help they receive from the people at the front desk. If they assume you know something, anything, that's probably the one thing you don't know about it, like closing the lid. :) My hairdresser said the lady didn't tell her to wear the indoor sunblock and so she got burned on all the parts her bathing suit usually covers. OUCH! I'd love it if we didn't have to close the lid. :) I wouldn't be so scared. Maybe they could make one with a room, bathroom sized, full of lights? But... now that I think about it, I don't think I'd like that either. I just can't believe anyone would go in those things to relax?!?!
September 27, 2009 at 11:56 AM

Veronica Boulden said…
Carrie, I usually have no problem being pale, but I wasn't EVENLY pale. The dress I have has no sleeves and it looked like I had a t-shirt on under it, the difference in my arms and shoulders was so much. LOL. So, after three days of tanning, I'm even all over my chest and arms and I think I am satisfied. But, thank you. ;)
September 28, 2009 at 8:23 AM