Skip to main content
Posted by Veronica Boulden on October 24, 2009
Warning: If you are under eighteen, do not click on the link at the bottom of this post. I will be very angry with you if I find out that you did so against my warning. Not to mention, your parents will be very angry with you for doing so and they may even be mad at me because you clicked on the link and then forbid you to look at my blog in the future without their supervision. And, if I find out that happened, I will be even more angry at you than I was to begin with.

That said, click on the link to the photo if you are old enough and feel free, but here's the post and you can read my comments either way.

Contrary to what you might assume, the picture below was not taken in Vegas or Reno or New Orleans at Mardi Gras. It wasn't even taken during one of those notorious spring break trips to Daytona or Myrtle Beach. In fact, these girls aren't even in college.

Ignore for one second the obvious questions that must be coming to your mind like, "How do you know, Veronica?!" or "How did you even get a picture like this?!" I'll answer those questions in one second.

I bet you'd never guess that this is actually a row of high school girls lined up for a photo-op on Halloween one year ago. That's right. These girls are in high school (or some of them were at the time). But, even if you did allow for that much, I bet you'll never guess where these high school girls were standing when they lined up like this, never in a million years.

You might think it's bad enough these girls are school-aged. Now what will you think when I tell you that this picture was actually taken while they were at school?

Now let me get to those questions that I know you must have. How do I know they are at school? Well, I went to high school in the same place. The courtyard where they are standing is where I hung out every single day with my friends. How did I get this photo? That's simple enough: Facebook. I am part of my high school's alumni group or I toured the groups page and someone in that group is in this photo, so I was able to tap into their photo collection and see their pictures that way. Oh the sights that a few innocent clicks will lead you to on the Internet.

Now, let me say. I cheered in high school, so at least once a week for four years in good weather I wore a cheerleading uniform with only an inch or two more fabric covering my young tush than these girls are wearing. Once, my team even did a dance routine at a school assembly wearing shiny bathing suits. We called them "bodysuits" but really, they were no bigger than what we'd wear to the beach. For effect and because we were told we had to have "skirts" on over such skimpy little bodysuits, we tied a handkerchief-type piece of fabric around our hips. One of our moms even cut these "skirts" out of a bolt of fabric, measured them to "fit" us just right and then hemmed them with her sewing machine. I shudder to think.

So, now you know, this whole post will be a case of the pot calling the kettle black. But, that said, I still manage to be shocked by this photo. It's probably because these costumes were obviously meant to illicit sexual desire. Some of them are actually classified as lingerie and sold on websites that pop up when you Google that kind of thing. And, I know department stores don't sell pantie hose like the red ones in the picture, the kind that stop mid-thigh. Those are still "novelty items" and sold only at stores tucked away from the main road with the word "adult" all over the signs.

I am not the first to notice kids wearing costumes that only a few years ago were reserved for raunchy adults in cheap motel rooms. This article in a high profile newspaper ventures to bring up the same sticky issue, only it says the problem has spread to pre-teenage girls, too.

We ponder why more and more young men are graduating from high school or college and going into the work force for the first time only to be charged with sexual harassment then fired or imprisoned over things they described as "innocent" and "harmless," things their high school teachers and college professors passed off as "normal heckling" or "flirting."

With their eyes covered, it's really hard to tell that these girls aren't ten years older. So hard, in fact, that I wonder if we should be making any distinction between them and their adult counterparts at all. If I couldn't go to work in skirts like this tomorrow, skirts that show my privates when I bend over, why was I ever allowed to go to school in a cheerleading uniform like the one I had? Aren't schools, teachers, parents, adults even, supposed to be preparing children for life, for the work force, teaching them what kind of things are appropriate in the world they will venture into?

It goes without saying that we are doing the next generation a disservice by not taking these kinds of things more seriously. Girls grow up thinking the men they work with are allowed to treat them like that, even dressing to encourage a certain kind of attention. Boys go into the world thinking they aren't doing anything wrong and are shocked to find what they are saying to the secretary when she smiles at them is actually illegal.

I have two more questions. If these girls are children, why in the world are adults letting them dress like this? Why aren't authorities stepping in and calling other authorities to intervene accordingly? And, if these girls aren't children (and I think it's pretty obvious that they aren't, functionally, children), then why aren't we treating them like adults? Why are we simply dismissing their antics as nothing but child's play?

I believe I speak for these girls, too, since one of them may not be able to run for congress when she is my age because of photos like this. Will the adults responsible for young people please step up, put your foot down and say, "No" when the teenagers you love and are supposed to be watching out for want to show this kind of indiscretion? They may not know better, but you should.

Only click to see this photo if your over 18! 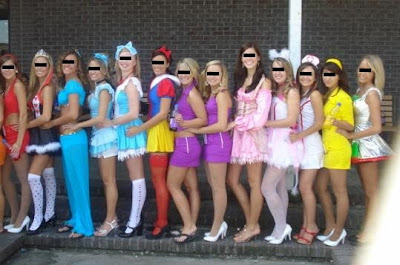