Skip to main content
Posted by Veronica Boulden on February 14, 2010 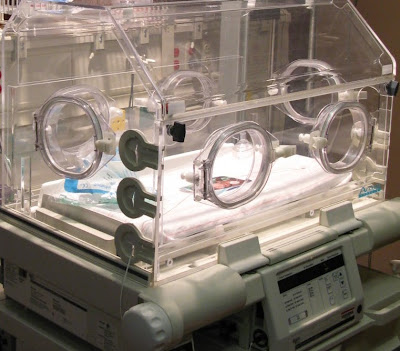 This baby was loved, deeply. And he was wanted, desperately. I had to pass his bed on the way to see Avril while she was in the NICU. So, I saw him several times while our daughter was still in the hospital. I always marveled at his form. I think I almost marveled at him more than I marveled at my little Avril. She was my daughter, yes, and her precious, newborn hands could just barely wrap around my thumb. She was so beautiful. But, his hands were the size of my thumb prints! He was breathtaking in his tiny perfection.

That afternoon, his parents stood by his covered bed, hovered by it really, visibly torn between their desire to cradle their boy and their awareness that such a gesture might actually kill him. So, they stood as close to his protective plastic case as they could manage and they did what they could. His mother had her hand in one of the special openings. From within a special glove attached to the hole, she gently stroked her baby's tiny hand (and I mean tiny) with her pointer finger. The father was standing a little behind and to one side of his wife with one hand on her shoulder communicating empathy and support. His other hand, I'll never forget, was stretched wide and placed, with meaning, right on top of the protective case covering their son. He was bowed down a little. I believe he'd have put his hand right on his son's chest, if he could have. You could literally feel the prayers they were sending up as they stood there, paralyzed with their inability to do anything, just willing their child to live, just wanting him to be well.

I took all this in in a matter of seconds and I was touched by the scene in several ways. I felt sympathy, since my daughter was also in the NICU, officially out of my care and in the care of doctors and nurses until they decided to allow her to be legally discharged. I felt compassion, too, since my child was in excellent health compared to theirs. We were actually preparing to bring Avril home that day. I felt thankful that I could walk over and pick her up, kiss her, nurse her even. I wondered, then quickly doubted, whether the couple had been able to ever even hold their son. It occurred to me that he must be very premature, months maybe... maybe months and months. And, then, all at once, the scene warped to something disturbing to me. I realized that their baby looked no different than the ones I've see in the pictures, those pictures of babies covered in blood and waste and piled up, the aborted ones that make everyone angry, then sad. Their baby was actually less developed than some of the children that are aborted, in fact. The only difference was that he was wanted. His mother (and also his father, in this case) chose him. For one second, I was appalled by the country we live in, where we say we champion the rights of humanity all over the globe, but where parents determine the worth of their own children.

I try to say all this with care, attempting to temper my words and strong feelings with grace. I want to tread lightly, knowing that some of the women who read this blog may likely have had an abortion and more importantly, may not have found the grace of God to deal with it yet. I do not claim to speak for God about this, but I assure you of one thing. There is grace from him to cover everything, even abortion. There is nothing humanity can do that His love will not heal completely.

I have often tried very hard to value a woman's choice, to see where others are coming from. I am living up north now and we have several "pro-choice" friends. And, I realize that so many woman I meet must have chosen to abort at least one child. These days, they say it is one woman in three. So, odds are, I know a few women, maybe more than a few who have made that choice. But, I will never be able to erase the image of that couple from my head. And, for some reason, the memory of them will be set in my mind within the context of abortion rights from now on. The mother and father, doctors and nurses, just wanted to build the same child that others on another day, in another room of a hospital, would tear apart. The whole thing seemed so absurd to me all of a sudden. And, I bet, at that moment, no matter how the couple leaned politically, they would have spit on a woman's "right to chose." They would have wept that anyone would not, even through the worst of circumstances, see the inherent value in the life of a baby just like their own.

It may be legal. And, no doubt, the situation will always be difficult when a baby is unwanted, particularly by the woman who is carrying it. But, I do not see that anyone has a moral right to choose who lives and dies, even if a baby's life depends on a woman's life and even if that baby inconveniences her or "ruins" her, as far as she may think. The value of a human being is never subjective and, therefore, it should not be subjected to any one person's opinion.

Of course, the same argument could be made in defense of a woman's right to choose. How can our opinion over this issue dictate what she does with her body? But, by undermining her baby's life, the way I see it, a woman undermines her own as well. Human worth isn't dependent on the right conditions to be worthy. That couple did not determine the worth of their son, as I see it, though they obviously wanted him and had made a place for him in their lives. But, even if no one stood by his bed, that baby deserved a champion because he's human and that makes him precious. And, if something is precious, by definition, that thing can't be made any less precious by anyone, even those who, for whatever terrible reason, would chose to deny it's value.
Political

Here we go... said…
Veronica, Thank you for sharing your heart. It is a beautiful story. I saw your comment on my blog and I wanted to stop over and "meet" you. It looks like we share a lot of the same values and ideas about life. I look forward to learning more about your homeschooling ways:). Thanks for stopping by!
February 14, 2010 at 7:06 PM