Skip to main content
Posted by Veronica Boulden on June 13, 2011 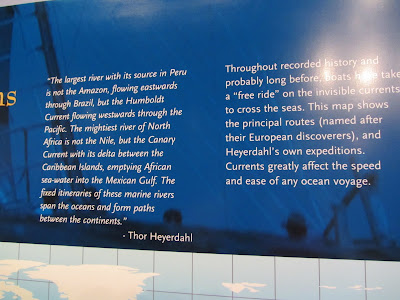 I found another rabbit trail to follow on my visit to the Timexpo. They have an exhibit about Thor Heyerdahl and his theories on the origins of the people on the Polynesian islands. He thinks people came across the ocean on the currents from the west, rather than from the east.

The exhibit mentioned an Oscar winning documentary which I found and watched online here. The documentary shows how Hyerdahl and a group of other men sailed from South America to the Polynesian islands on a simple, ancient-style raft. My friend also suggested I read the book Kon Tiki. I found it at the library and plan to go get it tomorrow.

According to the internet, most scientists totally dismiss his claims and have even gone on to prove him wrong, but that doesn't matter to me. His story is pretty interesting. I like the way he expresses himself. I think the book is going to be great fun.