Skip to main content
Posted by Veronica Boulden on June 12, 2011
I took my niece Sarah to the Mattatuck Museum and the Timexpo today. The state of Connecticut happened to be having their "Open House" event, so we were thrilled that we got in for free to Mattatuck and for a discount at Timexpo.

There was an interesting Civil War exhibit at Mattatuck. Below you see a copy of the Waterbury Republican after the war began. I thought it was interesting how small the type was compared to today's newspaper headlines and how many more words were on each page (and there were no pictures or drawings or prints anywhere.) People, quite literally, read more back then. 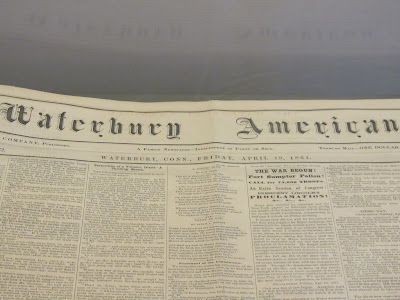 Coming to Connecticut after a youth spent in South Carolina where I visited the city of Charleston on a regular basis, where the Confederate rebellion is still celebrated, I was very surprised, even shocked, that quotes like this one were on prominent display here:

"You people of the South don’t know what you are doing. This country will be drenched in blood, and God only knows how it will end. It is all folly, madness, a crime against civilization! You people speak so lightly of war; you don’t know what you’re talking about. War is a terrible thing! You mistake, too, the people of the North. They are a peaceable people but an earnest people, and they will fight, too. They are not going to let this country be destroyed without a mighty effort to save it …Besides, where are your men and appliances of war to contend against them? The North can make a steam engine, locomotive, or railway car; hardly a yard of cloth or pair of shoes can you make. You are rushing into war with one of the most powerful, ingeniously mechanical, and determined people on Earth—right at your doors.You are bound to fail. Only in your spirit and determination are you prepared for war. In all else you are totally unprepared, with a bad cause to start with. At first you will make headway, but as your limited resources begin to fail, shut out from the markets of Europe as you will be, your cause will begin to wane. If your people will but stop and think, they must see in the end that you will surely fail." -Sherman

So, the exhibit had a decidedly Northern slant on the events of the Civil War and I suppose this is only appropriate since it reflects the history of the men and women who lived here at the time. But, as I compared this to my experiences in Charleston, I found this difference humorous since I think it shows how common it is for people to interpret the facts of history through their own experiences and sympathies. 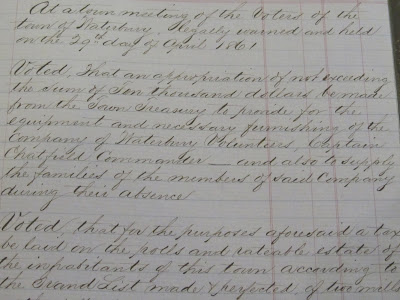 This record of a town meeting in April 1861 mentions a Commander Chatfield. I wondered if he is a distant relative of the current Mayor Bob Chatfield, Prospect, CT. I used to write the Chat with Chatfield column in the Prospect Pages. I may be so bold as to call him to ask about this connection. 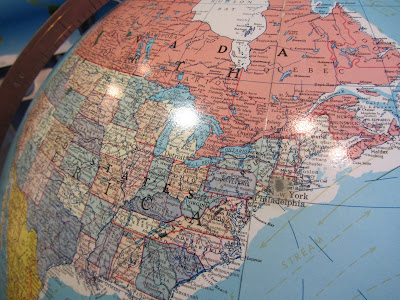 Notice where the globe is worn; further proof, I think, that we people are often self-centered in our perspective.
There is much more that I saw and more that peeked my interest at both museums today. But, I will have to share those things in another entry.