Skip to main content
Posted by Veronica Boulden on July 10, 2011 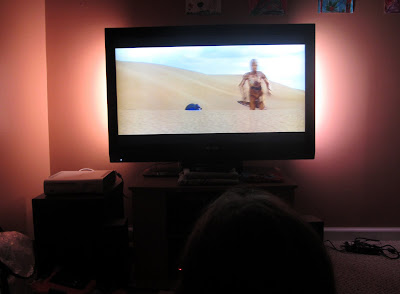 I arrived home from another long road trip yesterday evening. (I was taking my dad to Virginia to meet up with my mom so she could take him all the way home to South Carolina.) I had been home a few minutes when Dwayne said, "You should check downstairs..." I knew right away what he must have done, but I was still really thankful that he had made it a surprise. He bought a television while I was gone! The old television we were given a few years ago broke a few days ago and Dwayne said he had found this huge flat screen on Craigslist for only $400. (The guy who was selling it wanted to make room for his new 3D tv.) Dwayne explained that it is an older model but that also means that it works with the sound system we already have, saving us even more money. I am thrilled. It's never felt so good to buy a luxury. We celebrated by popping popcorn, putting the baby to bed and watching Star Wars, Episode Four: A New Hope with Norah. She'd never seen any of the Star Wars movies. We were holding out till we had a new television and we often joked that we hoped it would be before she turned 12... Well, the timing was perfect. She understood all the action and she loved it. We're so thankful. The little things can be really big sometimes.