Skip to main content
Posted by Veronica Boulden on July 25, 2011 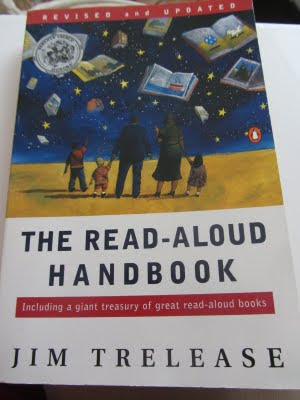 I found this updated copy of The Read Aloud Handbook at the thrift store. I did a little dance in the isle. It will be really nice to own a copy. I've probably paid for this book twice over with the library fines I've racked up checking it out again and again over the years. And now I can highlight in it. I've wanted to do that to the library's copy so many times.

The stack of books that I want to read to Norah is ever growing: Mr. Poppers Penguins, A Dog Called Kitty, The Summer of the Monkeys, The Family Under the Bridge, 100 Dresses... and with this book in hand, I thought that list would just get longer. But, it might not.

Interestingly enough, Dwayne is reading a book called Freakonomics. It's not a book about homeschooling, but indirectly, something he read out loud to me from the book is very relevant and interesting and surprising on this topic of reading aloud to children and may influence my view of the importance of reading aloud to Norah.

He says that the mathematicians who wrote this book proved without a shadow of a doubt that reading aloud to your kids is less important, even insignificant when compared to having books in your house.

The authors say that the numbers don't lie, but they also admit that kids can't learn through osmosis. So, they've come up with a theory that would explain the data. They say people who read are smart because, well... they read and smart people tend to have books in their house because they read them, so kids who live in houses with books have smart parents and smart parents produce smart kids because they talk to their kids about what they know... or something like that.

It seems obvious that a smart parent who talks to their kids would be more helpful than a dumb parent who reads smart things to their kids. Yeah. That makes sense. So instead of adding books to the stack of books I want to read to Norah, I may also add books to my reading list and then have new ideas to talk to Norah about.