Skip to main content
Posted by Veronica Boulden on July 20, 2011 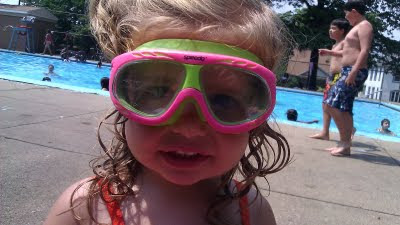 I took this photo with my phone earlier today. I took the girls to the pool for three hours this morning. I am loving our pool time this summer. We had a great day except for one serious incident.

Norah went to the deep end without asking. She says she asked, but I told her, "If I don't hear you, you didn't ask. It's your responsibility to make sure I hear you." She is technically able to swim in the deep end (thus I turn my head and let her swim for several seconds before looking back), but she isn't allowed to go into water over her head without me since she isn't a strong swimmer. She's a pretty lazy swimmer, in fact. I like to stay close by her when she is over her head because she will often panic when she has to tread water and she isn't close to a wall.

Anyway, I was playing with Avril and when I turned around to check on Norah like I do every fifteen seconds or so, she wasn't in the shallow end with us and she wasn't sitting on the side of the pool or on the steps or on the deck... I couldn't find her for about thirty whole seconds. It was the longest half minute of my life.

When I found her with a group of friends in the five foot, I could see that she knew she'd done something wrong. Five feet is past the point where she's allowed to go without me and just deep enough to be a problem for her at times and she knows that well enough. But, her friends today were older than usual and I think she wanted to be seen as a big girl and having me near when they decided to take their games to the deep end would have cramped her style. I'm pretty sure Norah was just clinging to the wall, watching through her goggles while the bigger girls dove for coins, but still...

I made her sit out of the pool for twenty minutes (maybe more) while Avril and I played and while I decided whether or not to just take her home. But, instead of going home, I decided to have her meet me at the deepest part of the pool. There, I made her do ten laps. She had to jump in and then swim across and tread water in between breaths and she wasn't allowed to hold onto Avril's float or to me for more than a few seconds at a time. (I was swimming just out of reach along side her.)

Did she fight me over doing so many laps? Yes, she did. She tried really hard to get out of them. But, I told her, "You can swim ten laps or we can go home." And she knows I mean what I say.

I am humbled by my inability to keep my kids totally safe, especially at times like this when they are old enough to understand and to obey, yet still hell bent on doing exactly as I instruct them not to. I am also so grateful for God's protection today. I think we can safely say this is the day Norah learned to swim, officially.