Posted by Veronica Boulden on May 07, 2014
The second day of initial training we all agreed to start a half hour early in the hopes that we could also finish early.

We started with a game called the caterpillar drill and then we went outside to run. We were told to run (not a sprint, but not a jog) the length of a basketball court, back and forth, touching the ground before we headed back, for about five minutes.

Then we went back inside and we did our first presentations of the day on the second track we were assigned.  We didn't do the warmup since the run functioned as the warmup and we didn't do the abs or cool down at the end, but we did do most of the release. I think that was the third time that weekend.

For my second track, I had Bodypump 89, Track 8- Shoulders. Someone else in my group was assigned the same track as well, so we both presented at the same time.  The other lady presenting took three participants and faced one way; I took the other three participants and faced the other way. There was only one mic, so we both went without.  I felt a little uncomfortable because I was afraid I'd be talking/ yelling over someone else, but once I was told to get started, I just went for it, coached the heck out of my little group, and tried to forget about everything else that was going on in the room.

After that, we gathered around again, heard our trainer's assessments of our latest presentations, and reviewed our latest videos and pictures.

I did alright. My form was good on some things, off on one thing in particular. I wasn't standing in SET position during the rotator-raises. My feet were way too wide.

Next, our trainer, Evelyn, explained the certification process, then lectured us about the different layers of coaching and told us what layers we'd need to demonstrate to earn a pass.

We went to lunch and while in line at a coffee shop, I took this picture of my palm.  I was developing some awesome callouses from using the bar all weekend without gloves. I still have them. I'm proud of them. 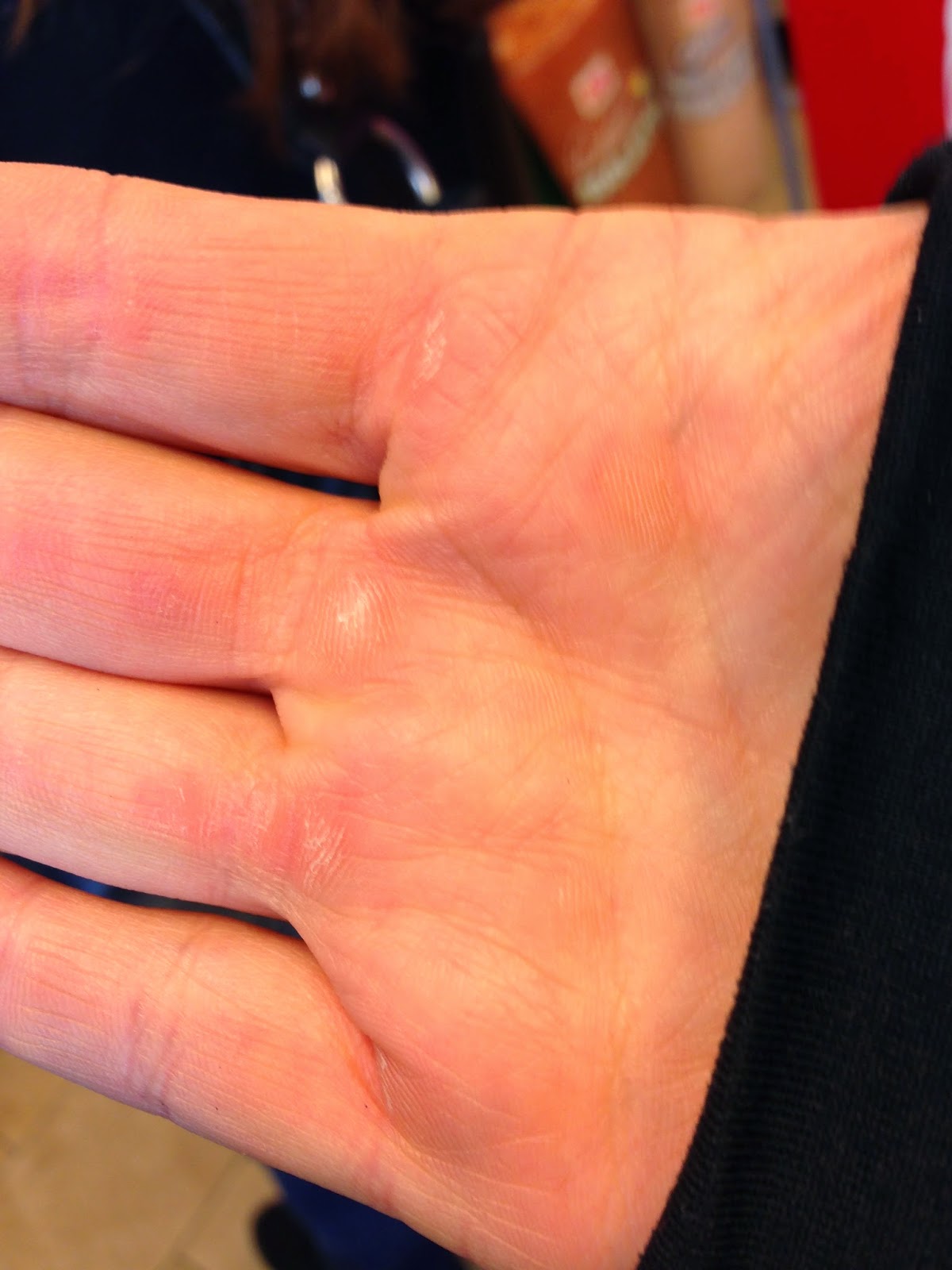 When we came back from lunch, we were lectured on the three types of participants and how to make the workout connect to each of them and Evelyn also talked to us about how to put everything together to create fitness magic.

Finally, we were given a little time to study again before we presented our track one last time, the same track we had already presented once that day.

This time, Evelyn put on the mic and took us through the warmup. After that, each person came up for their assigned track and then, when we were all done presenting, Evelyn came back up and took us through the abs and cool down, so it was a whole Bodypump 89 class.  Doing the entire release was a nice way to finish the weekend.

After that, we discussed what we each had learned and what we thought we would need to work on, etc. Then Evelyn showed us the Les Mills greeting, read us the purpose statement, and welcomed us to the tribe.  That was a neat, emotional experience and I teared up, but none of my tears actually fell, thankfully.

Then we were asked to clean up and stay in our spot until Evelyn had a chance to come around and give us our final assessment and talk to each of us.

When she came up to me, she said, "Awesome job," handed me my papers, and said a few others things.  But I was so nervous, I don't remember everything else she said!  I just nodded a lot. I thanked her and complimented her before she left because she really did inspire me with her strength, technique, beauty, and wit.  I don't think the fact that I had passed really sunk in until she walked away and I looked down and saw the check mark next to the Pass (3/3 Yes). At that point, it sunk in and I actually kissed that part of the paper quietly and teared up again.

Next, I took a photo and posted it to Facebook, of course.  I wanted my husband to see it and everyone who knew I was on this journey to see it, too.  I don't have very many friends who actually do Bodypump like me.  But I have a lot of supportive people in my life who are so encouraging to me.

Like I have explained on previous posts, the gym where I teach doesn't have the license to teach Bodypump, so all along, I have known I will have to start working with another gym that does have the license to earn my certification. So if I ever earn my certification and get my own class, I will be working for two gyms at that point, one where I will keep teaching freestyle classes and one where I can teach official Bodypump classes.  A lot of my coworkers already teach for more than one gym, so I know it's a common thing. 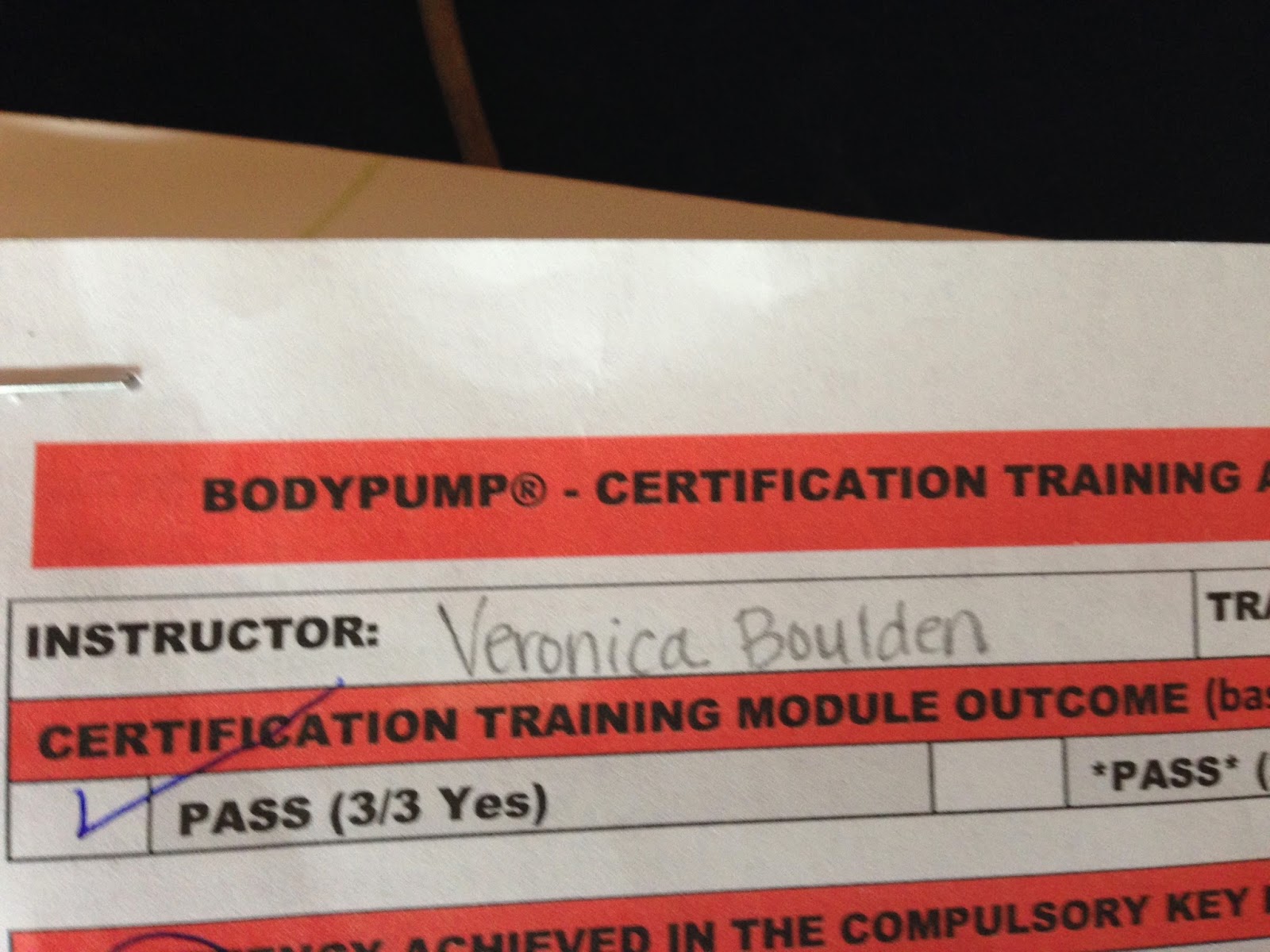 On the way home, I listened to the album Tides by Bethel Music.  When the song Ascend came on, the lyrics really moved me.  I felt like the Lord was giving me permission to pursue excellence in Bodypump and work as hard as I will need and want to in order to do well, but I also felt like the Holy Spirit was encouraging me, "Ascend to the hill of the Lord.  Keep clean hands. Keep your heart pure- then you will see God." I agreed. I told God in prayer that I wanted to pursue His will for my life (which I think includes Bodypump), but more than anything, I want to pursue Him, just Him.  His presence is important thing to me. Years ago, He promised to be with me on my fitness journey.  And He has been faithful to get me healthy.

It started raining about an hour later and then it stopped pretty quickly and the sun came out.  The interstate I was driving on curved and when it straightened out again, I was astounded by a huge rainbow filling the sky in front of me.  Light filled my car and the colors of the rainbow were radiant.  I had to pull over to see without getting in an accident. So I pulled over and I jumped out and tried to get a picture.  The rainbow was so big, I couldn't get it all in one photo, so I had to take two! 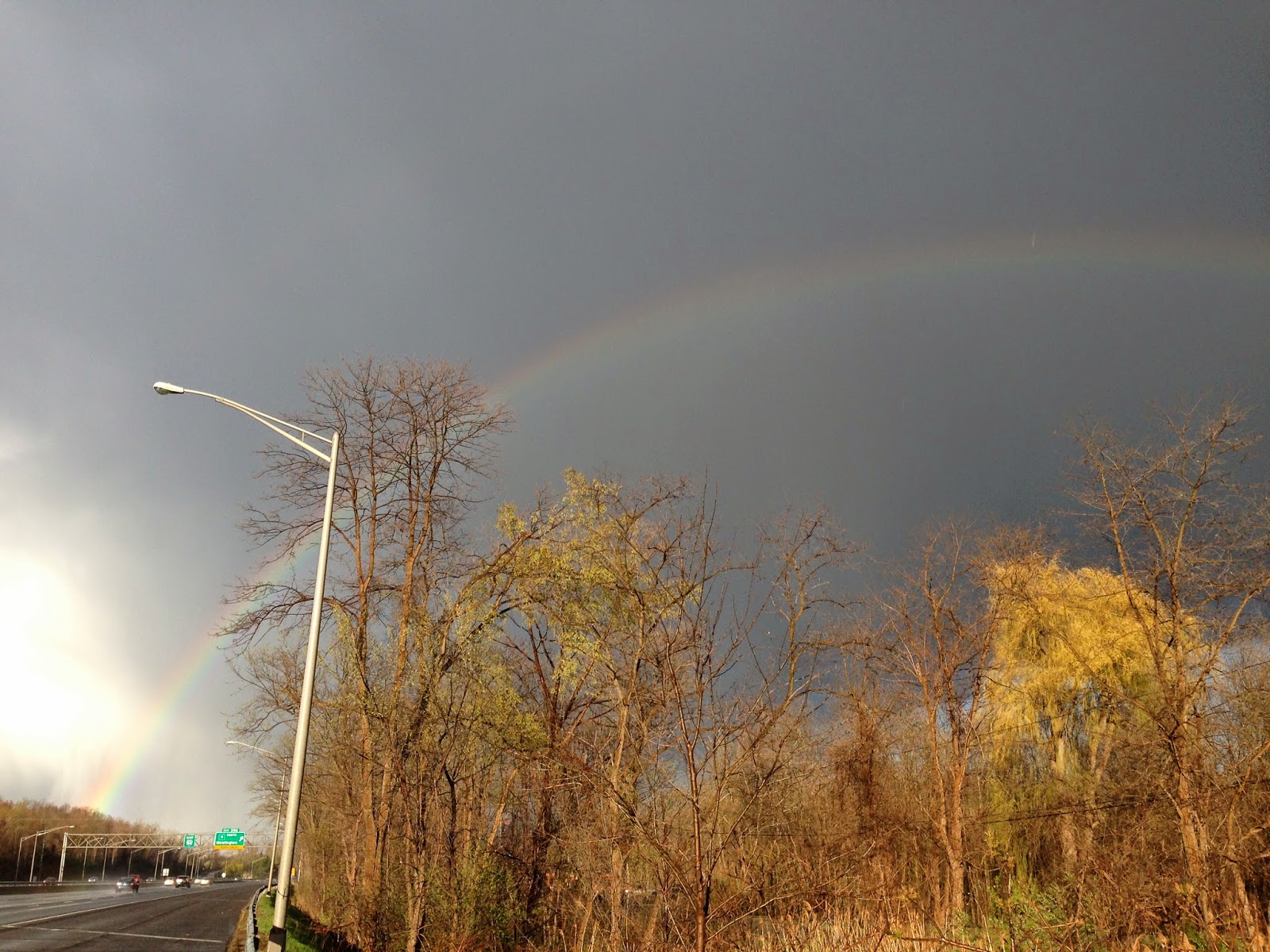 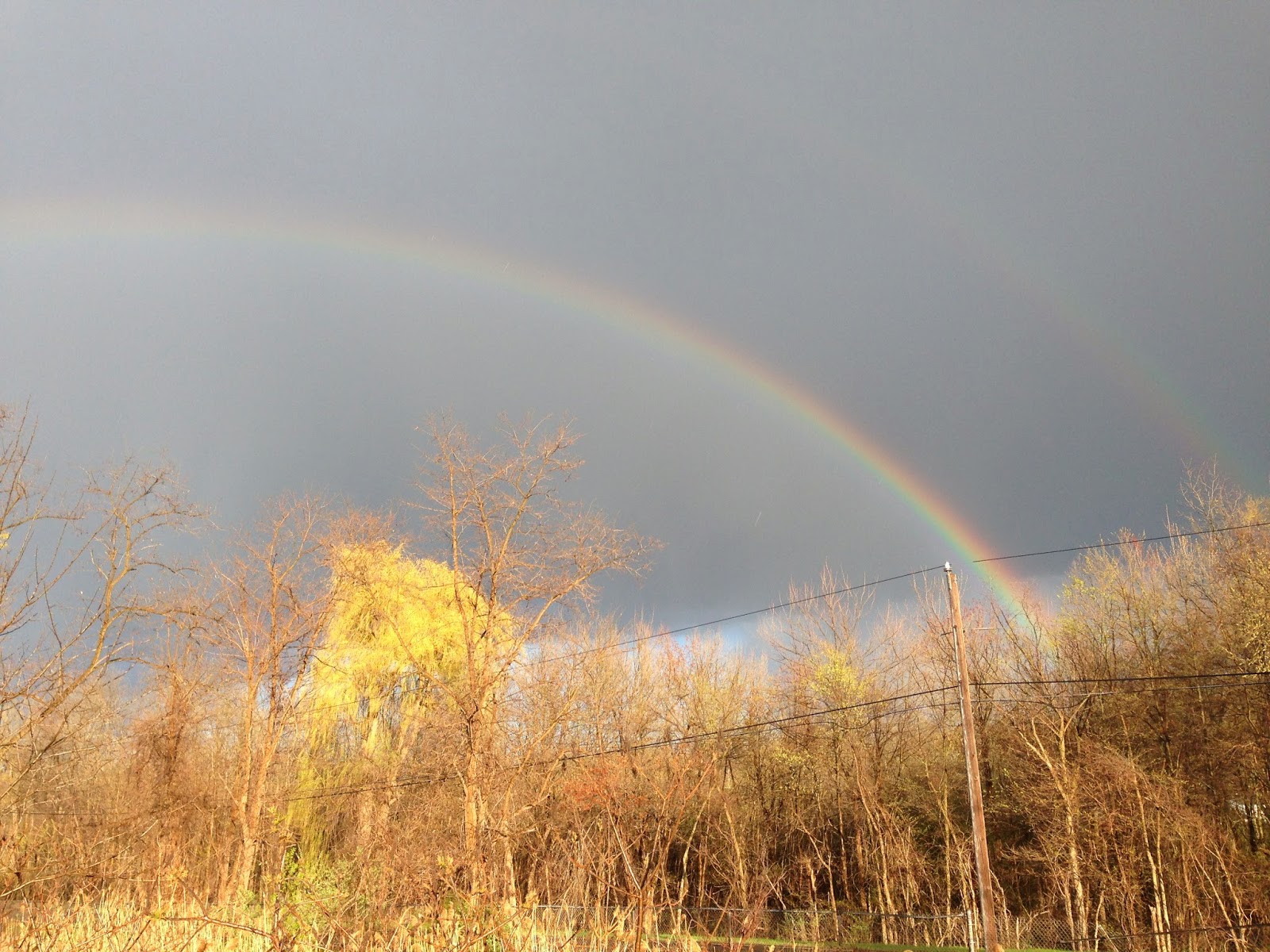 The photos don't capture the glory.  The rainbow felt much closer, larger than life, even intimidating, kind of like what it might be to actually stand in God's presence. I've always been told that Heaven is filled with light and that God's throne is surrounded with rainbows, so I took this as a clear sign that God was telling me that I am headed in the right direction, right to center of His will for my life, but more importantly, right to the hill of the Lord, right to Him. The rainbow was also sign to me that He is still with me on this journey and like I said years ago, I don't want to do anything without Him.