Posted by Veronica Boulden on November 29, 2022 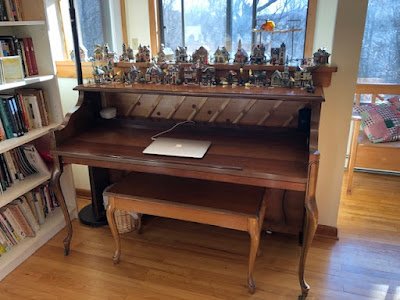 Dwayne converted our family's old spinet piano into the most lovely writing desk.

(Fear not. This piano was pretty much worthless when we tore it apart.)

We were thankful to have it. It was an answer to prayer. And the girls used it hours everyday for years.

But when we were given an excellent grand piano and were trying to decide what to do with this old spinet, our piano teacher and tuner worked up the courage to admit that it was probably best to just throw it out; It had such poor sound quality and went out of tune constantly, so it would not be a blessing to anyone.

(And knowing how often we had to pay to tune it, we knew this to be quite true.)

So as we were discussing taking it to the landfill, our oldest daughter suggested we turn it into a desk instead.

She had seen pictures of old pianos converted into desks online.

She still had a fondness for this old piano since she'd learned to play on it.

And she wants to be writer.

So we thought if we could make it into a desk, it could be hers and it could be her graduation gift, since she was about to graduate high school at the time.

We couldn't find a single craftsman who wanted to do the job, so my husband took on the project on himself.

It took a little longer than we planned. We couldn't give it to our daughter at graduation, but it's done now.

And it was lovingly done by her own father.

It's still hers when she wants it and has a place to put it.

But for now, it's beautiful, and I am really enjoying it.