Posted by Veronica Boulden on November 06, 2022 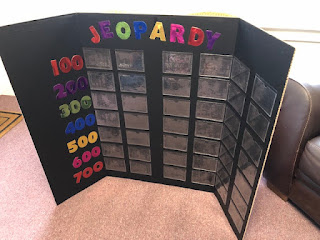 Recently, I made a Jeopardy board to use as a review game with my Foundations class. It was a big hit with my class.

Rubber cement (to glue the letters/numbers on the board)

(I had most of these materials already, leftover from former science fair projects with my older kids)

To make the board/ set-up the game:

Arrange and attach the pockets in six or seven columns of seven rows as shown in the photo above.

Note: If you want a column for every subject, you'll need seven columns of seven cards. I only made six columns, one for History, Math, English, Latin, Geography, and Science. I decided to leave Timeline off my Jeopardy board entirely. We just reviewed the entire seven weeks of timeline before playing the game.

Latin, which has the same flashcard for two weeks in a row, went in the 200, 400, 600, and 700 rows. That way, students could get the most points possible for Latin memory work.

Split the class into two teams and have the teams line up facing the board.

Alternating between teams, allow the first person in line to choose a category and point value to try for.

When their turn is over, they go to the back of the line.

Note: You can allow the teams to answer as teams or ask students to answer as individuals. You can give them help when they are stuck or challenge them to remember on their own. Our Foundations director stresses keeping games fun and stress-free, so I just give them the help they need to keep the game moving along quickly, so we can review even more memory work.

Ask a class mom to keep score on the board, and give the winning team a small prize.