Skip to main content
Posted by Veronica Boulden on August 17, 2009 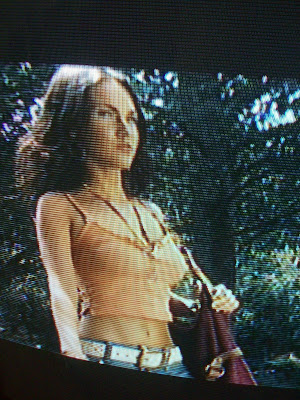 If we were watching a movie as a family, before the TV broke, nine out of ten times it was Transformers. The movie just never got old to us. I would try explain all the reasons why we loved it so much, but I want to get to the point of this post. It has nothing to do with the movie's positive characteristics, of which there are many, but has more to do with the one and only thing we do not like about the film and that is the "evil jock concubines" clothing, or lack thereof, in this scene. I paused the movie in the place we had so much trouble with and took this photo to illustrate my point. We often talk to Norah about the heroine's immodest shirt and skirt, just in case she happens to be under the false impression that we like everything about McKayla or that we will let her walk out of the door to fight alien robots in that kind of tank top when she's sixteen. "Oh no. You march yourself back down that hallway and put on a sensible t-shirt before you even think about driving a tow truck backwards through a war zone." On one of these occasions, when I mentioned how I think McKayla should cover more of her precious tummy with a longer shirt, Norah said to me, "Maybe, Mom, after she was a little girl like me, her parents never got her any more new clothes." I laughed out loud at that. I have admit, Norah's hypothesis would explain why McKayla's shirt isn't any bigger than Norah's size 5ts.
Humor

carrie said…
Glad to see you believe in modesty too! It's nice that the current fashion for teens is layering. They can wear an itsy bitsy dress over a t-shirt and jeans and still be in style!
August 20, 2009 at 8:51 PM