Skip to main content
Posted by Veronica Boulden on March 18, 2011 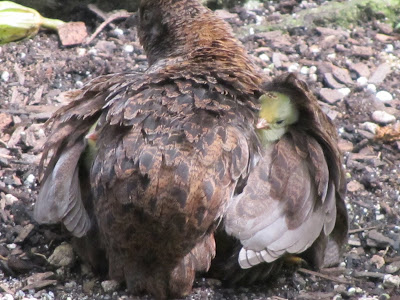 This button pigeon was the size of a man's fist and her chicks were as big as the end of my thumb. It was spectacular to see them scurrying around behind their mother everywhere she went. But, the sight of the mother stopping and sheltering them under her wings was almost overwhelming. In this picture, the chicks are being unruly and squirming out of their moms grip. But, when the hen closed her wings very tightly, you could not even tell her chicks were underneath. I thought at once of the passage of Scripture that records the fact that Jesus wept over Jerusalem and said, "How often I have longed to gather your children together, as a hen gathers her chicks under her wings, and you were not willing..." I also thought of the Psalm that goes, "...Hide me in the shadow of your wings." I had never seen a hen with her chicks under her wings until that day. I had no idea these verses implied such a secure, almost tight, relationship between God and us.
Nature