Skip to main content
Posted by Veronica Boulden on January 19, 2009 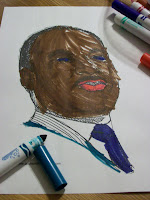 A coloring page of Martin Luther King Jr. Norah is in the process of finishing. In addition to her regular lessons today, Norah and I found this picture and watched his famous speech online to celebrate the holiday.
"In a sense we've come to our nation's capital to cash a check. When the architects of our republic wrote the magnificent words of the Constitution and the Declaration of Independence, they were signing a promissory note to which every American was to fall heir. This note was a promise that all men - yes, black men as well as white men - would be guaranteed the unalienable rights of life, liberty and the pursuit of happiness. It is obvious today that America has defaulted on this promissory note, insofar as her citizens of color are concerned. Instead of honoring this sacred obligation, America has given the Negro people a bad check, a check which has come back marked 'insufficient funds.'"

This is an excerpt from his famous speech now titled "I Have a Dream" given in front of the Lincoln Memorial during the historic civil rights march on our nation's capital in 1963. The march was the largest peaceful protest in the history of our nation. People came to show their support for the Civil Rights Act that, once passed by congress the next year, made the racial segregation and discrimination going on in certain states illegal.
Political