Skip to main content
Posted by Veronica Boulden on January 11, 2009 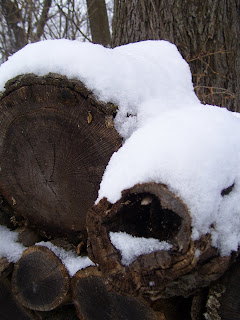 This is a recent photo of snow covered logs on our wood pile in the backyard.
I wonder how may insects are hiding there.

Where do insects go in the winter?

I've heard and seen the footage of the millions of monarch butterflies migrating south for the winter. It's awe inspiring. But, I've been wondering where all the other insects go this time of year.

I did some reading and found out that there are quite a few insects who travel to warmer places to wait out the winter, just like the monarchs. But, most insects prefer to stay put where they are and do some interesting work in order to survive the oncoming cold.

Insects are cold blooded, meaning their internal temperatures fall (or rise) with temperatures outside. So, the winter presents them with unique dangers. Just as the water in ponds or lakes will freeze, any water that is inside an insects' bodies could freeze, too. If it did, it would expand, like water always does when it freezes, and at some point, the newly formed ice crystals inside the insects' bodies would literally tear their six legs off their bodies from the inside out.

But, to get around this fact of nature, insects do an awesome trick. They reduce the amount of water inside their bodies and replace it with a substance called glycerol that has many of the same attributes as antifreeze. That's right. Insects make their own antifreeze! Who knew?!

For extra protection from the cold, insects will also do something like burrow into the ground under layers and layers of fallen leaves. As the snow falls thicker over those leaves on the ground, insects will be even more insulated there as the weather gets more harsh above them. Many insects also prefer to hide in, between or under empty logs within something like a cocoon they build to insulate themselves even more from the cold. In these hiding places, insects rest, much like bears hibernate, until the temperatures outside are warm enough and there is enough new vegetation growing in the spring for them to survive on again.

So, like me, insects are hiding away "indoors," snuggling up to stay warm this winter. And, just when I feel like it is warm enough to venture back outdoors in the spring, the insects will begin thawing out and they will be ready to greet me there.
Nature