Skip to main content
Posted by Veronica Boulden on June 17, 2009 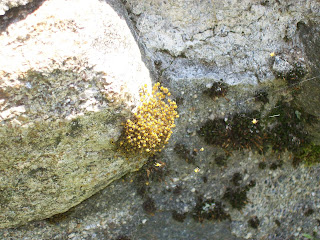 Norah's young eyes pick up every little movement in the grass. Over and over again, she will point to something and say "Look, Mommy!" and I will look in that direction, but still have to ask, "Where?" She will point to it again, I'll move in closer and look harder and have to ask again, "Where?" Norah's used to this by now and she will usually sigh, sometimes she will even roll her eyes, but she'll say, "There." and point to it again. This process will go on as often and as long as I need it to. When I finally do see whatever it is she's talking about, I am usually so close to it that I have to jump back.

This is why we've asked Norah to keep an eye out for snakes on the paths we all hike together. You may think that it is absurd to give this task to our four year old, but she's proven that she is, by far, the most equipped for it. Of course, we keep our eyes open, too, but I am being honest when I express my doubts about the good that does. Maybe being only three feet tall and closer to the ground gives Norah a big advantage on her grown-up parents or something.

But, anyway, the other day, Norah pointed to our rock wall out back and said, "Look!" I had to go through the process of getting close enough to see what she was talking about and when I did, well, I had jump back first, but then I leaned right back in to see it better. Norah noticed a golf-ball sized pile of tiny spiders, hundreds of them hatching (Do spiders hatch?) from their egg sack. They were crawling around and putting off tiny webs to catch the wind and fly away from the nest (Do spiders have nests?). It was just like that scene at the very end of Charlotte's Web, when all the baby spiders are flying away from Wilber in the barn and squealing with glee.

We enjoyed watching (and dodging the flying spiders) for some time. I'm so thankful for Norah because there is, quite literally, so much I'd miss if it were not for her.
Nature