Skip to main content
Posted by Veronica Boulden on June 23, 2009 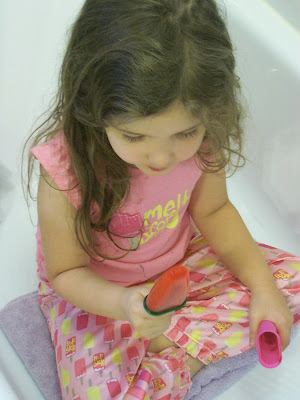 This is a picture of a kid who got her way.

No. That's not entirely accurate. Let me rephrase that.

I can be the most persistent person alive. I can wear someone down like a file wears down a fingernail. Just ask my husband.

Norah asked for an ice pop. Then she asked again.

The only reason I had for saying "No" was because I didn't want her to drip the sticky, red mess all over my floor. If it was a nice day, I would have let her eat one or even two ice pops outside on the deck. I was explaining this to Norah for the second time, while she was doing her best to convince me that maybe she wouldn't drip anything on the floor, if she was careful. But, I could tell she wasn't even convincing herself of the truth of her statements, since she was hiding her hands behind her back because of even they were still pink in places from the drips that stained them a few days ago, even after a bath.

That's when I had a moment of clarity.

Now, I know some of you self righteous folks are probably shaking your heads as I admit this. My daughter should have given up as soon as I said "No" once, right? But, I could see in Norah's eyes that she respected my creative solution to our dilemma and you can see from the picture above that Norah was entirely willing to go along with my conditions.

And, in defense of what I think was a beautiful compromise and to answer that authoritarian version of myself who sits on one of my shoulders and mocks me when I make parenting decisions like this, as far as I can tell, having kids isn't supposed to be like having subjects. If there is nothing wrong with what our kids want, I think it is okay if we parents and kids just find a way around the challenges together.

Here's hoping any compromises I have to make with Norah go this smoothly when she's a head strong teenager.
Family