Skip to main content
Posted by Veronica Boulden on March 23, 2011 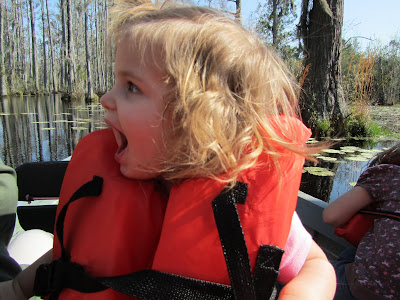 "Shouldn't she have been looking around at everything?"

This was the question my sister asked me when we were talking about that boat ride in the swamp after we had put the girls to bed for the night. My sister is a perceptive lady and a pretty courageous one to ask me such a pointed question, I might add. But, I respect my sister's thoughtfulness. She wondered, genuinely, how much valuable, textbook-type information Norah took away from that boat ride for real since, as you can see from the background of the photo above (far right), Norah spent most of the trip hanging over the side of the boat with her fingers in the chilly, tea-colored water.

I wondered the same thing that my sister did. Throughout the boat ride, I encouraged Norah to look around her at the magnificence of the swamp, scolded her for being so narrowly focused on the sensation of the water on her fingers, even threatened her with punishment if she didn't quit hanging so far over the side. I was nervous at times that she may actually even fall in.

But, I told my sister (and myself) that at least Norah got to experience the simple pleasure of the water passing through her finger tips heading one direction as the boat she was in glided another. That was something. And, generally, that is more than many kids in school groups on formal field trips get to do with their teachers concerned that their hands and feet be in the correct places for attention to be paid and for real learning to take place.

The first boat ride being the Swan Boats at Boston Public Gardens last summer, the second being in the same boat and the same swamp only a few days earlier, but in that case, Norah was just too thrilled to be in a boat and in a swamp and sitting right next to the tour guide, of all places, to even notice the water under her... but, during this boat ride Norah's goal was to touch the tops of every lily pad she could reach, obviously. And she must have touched at least fifty.

That wasn't my goal for her during that boat ride, though. I would have liked for her to listen to the tour guide and ask intelligent questions and look less like an average child and more like a home school prodigy/ saint. But, come to think of it, I heard everything the tour guide said but I can't recall any of it. And, I can't say that I've ever touched the top of a single lily pad, let alone fifty!! I had my hands in the boat the whole time sitting properly.

I mean, have you ever touched the top of a lily pad? Do you even know what that feels like for real?
Homeschool