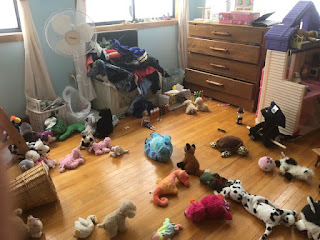 Don't structure every minute of your kids' time.

They need a strict routine, but they also need long bouts of unstructured time,

time enough to get bored

Boredom can be a good thing,

a great thing even.

It is not something to avoid.

And don't give your kids an easy out by just letting them play video games or watch shows on their screens all day when they show signs of boredom.

Your kids will pester you and you'll be tempted to just cave and let them have their way, but hold out a while longer.

Once your kids figure out that you are actually serious about them finding others ways to entertain themselves besides screens, they will do so, because they can't stand being bored either.

This week, we had to cancel our co-op because a majority of the families were ill.

So we had more free time than usual, so the girls had time one afternoon to get really bored, bored enough to play with their stuffed animals for hours,

Apparently, they used various items in their room to make a town.

The town had commerce (baskets became stores with various Barbie doll items for sale inside).

And the town had citizens (various and sundry stuffed animals collected over generations. Great grandma's stuffed animals are in our collection. So are some of mine from when I was a kid).

And the town had a traffic cop- (a stuffed dragon with a police hat from the dress up box holding a dow rod from the cross stitch supplies as a symbol of his authority).

Apparently, this dragon brought great order to what had been drama and chaos.

(I don't see order in the picture they made me take, but they saw it there.)

It was delightful to hear their voices and laughter and footsteps from where I sat downstairs.

It was delightful to hear something of the world they had created together.

It is a memory they'll have forever.

And their imaginations are richer for the strong exercise.

So don't make things so easy on your kids that they never have to make up their own fun.

Let them grow bored enough to create entire worlds out of what's on hand and then travel there for hours.