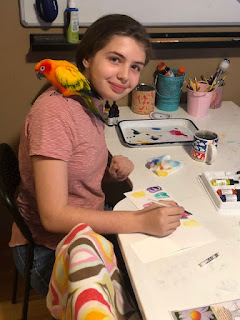 Arranging the Science Fair board has taken her hours.

I am encouraging her to tape everything on first, so that way, she can move it if if she changes her mind about where things go.

And she keeps making changes.

And I suggest changes, too.

In the photo above, she's painting colorful, large numbers for the "Procedure" section of the board, something she determined the board would need once she placed all the original elements on. 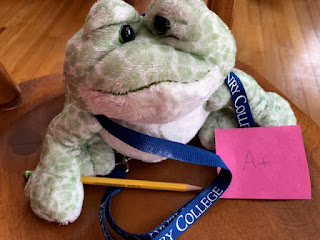 I am also having her practice her presentation for the judges fairly often, since most of the other work is done, and because she is is nervous about the presentation in particular. Rather than adding to her nerves, I think practicing her presentation will allow her to get so used to it that it becomes second nature even under pressure.

Today, I had her shut the doors to the room she was in and film herself going through her presentation with my cell phone camera. I'll watch it with her later and we'll assess how she did, and I'll encourage her to suggest changes for herself, and I'll probably suggest some changes, too.

For fun, her little sister created a "judge" from a stuffed animal. He's holding a pencil and clipboard, and he's wearing a lanyard from a college we visited with their older sister this year, making him very official looking. He also never blinks, making him a very intense critic.