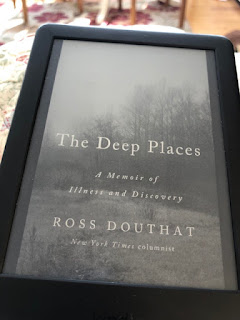 I read this in a day’s worth of free moments. This book uncovered so much anger and grief that I thought were gone. But it turns out the angers and griefs were only hiding just below the surface. I still have anger over having a child’s health wrecked by Lyme, grief over experiencing so much death of family and friends in the last few years, anger and grief over the betrayal of my own body falling so far to Lyme that I lost my will to care about my health anymore. Caring about health became a total luxury. God broke my fingers and pried that idol out of my bloody hands. It was like I had to let it go or just die, because I only had the energy to survive well enough to do the most essential things with my body as it now was: keep faith, care for family, teach my daughters… This book exposed that anger and grief and I cried many antiseptic, astringent tears. It is so well-written, researched, and balanced, and so painfully relevant. I can’t recommend it enough to anyone who lives around here where everyone has had Lyme or knows someone who has had it, where everyone is confused. Like most everyone on social media, I admit I usually only publish the good stuff, and I maintain that my Facebook page is not entirely fake, because I have countless blessings and I usually focus on those. But I’ve been quietly crawling through and up out of a physical hell for a while, and I’ve been on a spiritual journey, too, of course. I am an embodied soul, after all. But I figured out quickly that I could and would wear even my closest friends out with complaints or confusion, so I limit how much I talk about it even to Dwayne and even in the past-tense, since I am better. But this comes as another terrible mercy on the journey. The author balances his Faith with Reason well. He demonstrates how his story is both physical and spiritual, just like Reality. I now picture Sin as a burrowing spirochete and probably always will from now on with a shudder, because of what is actually in my body. But that’s just the imagery Scripture uses for Sin. The whole earth including our bodies is under a curse and groans for redemption. But my physical and spiritual hope remains the same: Jesus came into the actual, physical world and donated His body and transfused His blood and gave up His Spirit and then took it back. “Who will save us from this body of death?” Thanks be to God for Jesus Christ our Lord! He’s been as deep as Sin can ever go, and now He’s seated at the right hand of God.