Skip to main content
Posted by Veronica Boulden on January 06, 2009 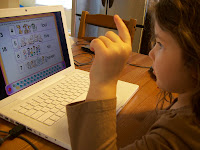 Norah likes to play her new computer game when she gets some free time at home (and when her Mommy isn't already using the laptop to blog). It's a treat for her and does the job of reinforcing what she's learning in home school in a fun way. We had to order the software directly from the Mac store online, because after several tries, we realized none of the versions available in retail stores would work on our computer even if the boxes claimed they would.

I am not one to push technology on little kids, but Norah proved she was ready for this in a way that was humorous to me. The local library has educational games installed on a computer in the corner and after a few weeks of Norah watching other kids play, I discovered her standing behind the other kids who were taking their turns, coaching them over their shoulders with all she had to "Go right!" or "Pick the red one!"

I figured it was time to take advantage of some of her enthusiasm with a game of our own.

Sherry Gann said…
If you haven't already, you might want to check out the free online games at http://www.peepandthebigwideworld.com