Skip to main content
Posted by Veronica Boulden on August 01, 2011 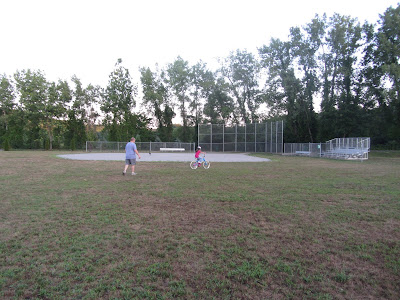 The other day, I found Norah the right sized bike at the thrift store for only $8. I'm not an expert, but the only thing that appeared to be wrong with the bike was the thick layer of dust and the cobwebs on it. I figured I'd waste eight dollars on a bag of hamburgers, so it was worth a try. (Plus I could return it within a week if something was wrong.)

We dusted off the cobwebs and took her up to the neighborhood park so she could try riding in the grass without training wheels. It took several tries. She and her dad were both winded and dripping sweat from the effort, but she ended up riding for a few long stretches on her own. We let the girls play on the playground and then we all walked home to settle in before dark. 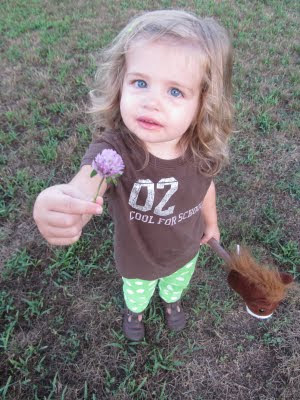 Avril trailed along with Norah carrying her "Yee haw!" When Norah stopped, Avril would catch up to her and then get in the way when Norah tried to take off on her bike again and then she would be scolded by Daddy. I should have tried to do a better job keeping Avril occupied and distracted, but she really only wanted to be where Norah was so that was probably impossible anyway. Avril picked this clover herself and I managed to get a picture when she showed it to me.