Skip to main content
Posted by Veronica Boulden on August 18, 2011
We finished two read-alouds this week. 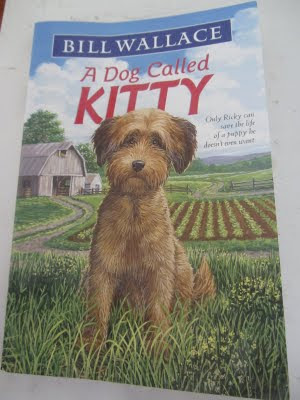 We finished A Dog Called Kitty by Bill Wallace-

This book had Norah and I weeping at several points. When I was too choked up to read, Norah would rub my back and put her head on my shoulder till I was strong enough to read again.

The narrator goes from being terrified of dogs because he was attacked when he was a little boy to saving the life of a starving stray pup who wanders onto his farm and even growing to love this dog, Kitty, for his very own. It's very heartwarming.

In other scenes, the narrator fist fights with a very angry and aggressive bully who is friends with some of his school friends. The narrator also ends up throwing this bully's very aggressive dog into a barn wall in another scene (to keep him from torturing another starving puppy.)

I spent my elementary years in rural Oklahoma and Texas. This story is set in rural Oklahoma. My mom was a public school teacher there and the author of this book was one of the nearby school principals. My teacher read it out loud to my class one year. That's how I knew about it to begin with.

This book is written to kids in that culture, kids who are free to roam all over town and country and who are required to contribute to the family by working on the farm. In roaming, they have to be aware of dangers suburban kids grow up totally ignorant of (like avoiding dangerous animals traps with poison all over the pastures) and in working the farm, kids also have to be capable of serious challenges (like protecting a baby calf from wild animals).

Anyway, all this to say that this book ain't for sissies. It also isn't a book every parent would choose to read to their kids for the reasons I mentioned above and I get that. 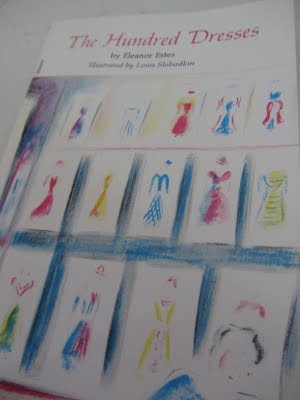 We also read The Hundred Dresses by Eleanor Estes.

This story is about a poor, little, immigrant girl who wears the same dress to school every day and gets picked on by the wealthier girls in her class for telling them that she has "one hundred dresses" in her closet at home.

The little girl doesn't speak English as well as the other kids. What they and you as a reader don't realize is that the little girl means she has drawn one hundred dresses and hung the pictures up in her closet "all lined up in a row."

The narrator and main characters realize too late, because the poor little girl and her family move away due to prejudice, that all the fun and laughs they had at this poor girl's expense was really cruelty, even if it was subtle and even if the girl appeared to be lying. They resolve to stop picking on people and even to stand up to those who do.

Norah and I had a very long conversation about treating others they way we want to be treated sparked by this book. It's a good read for little girls, especially those who are going to school or going into any environment where the clothes a person wears are often valued above a person's inner character.
Homeschool